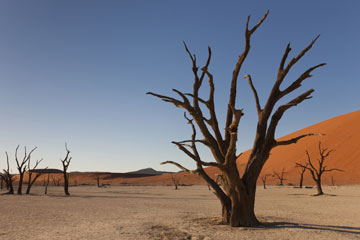 Venture through Namibia's central Namib Desert and you'll find salt marshes where vegetation and creatures as large as the great, horned oryx scrape out a harsh existence, surrounded by some of the largest sand dunes on Earth.

Not all of these marshes stood the test of time. In the curious site that is Deadvlei, the water table has long since receded from the clay, and the ground is dry and fissured. Skeletal trees 900-years-dead stand scorched in the sun, solemn testaments to the destructive power of drought.

Throughout Earth's history, drought has reduced whole species to bone, toppled empires into ruin and altered continental landscapes. For all our modern conveniences, drought still poses a substantial threat. Between 50,000 and 100,000 people died amidst East Africa's devastating 2011 drought [source: Tisdall]. In the U.S., 2012 drought conditions ranked as the worst in 50 years and diminished corn crops, affecting both the food and corn ethanol markets [source: West]. In fact, the U.S. Department of Agriculture predicted that 2012 drought conditions alone would raise 2013 food prices by 5 percent [source: McDermott].

We are creatures of water. We live on a world of water, and wherever hospitable temperatures and abundant water coexist on the planet, the marvel of life flourishes.

But what happens when the rains cease and the riverbanks withdraw? Everything from abundant grasses to apex predators suffers the consequences. 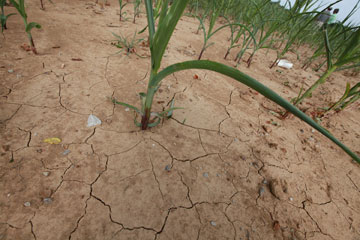 A corn plant grows in a field parched by drought on July 26, 2012, near Olmsted, Ill.
Scott Olson/Getty Images

In simplest terms, drought is a prolonged dry period due to a chronic shortage of rainfall in a region. This shortfall results in hydrologic imbalance, which means a region's precipitation can't keep up with the local rate of evaporation (the vaporization of water) and transpiration (the movement of water through soil and plants).

Drought strikes a region for complex, myriad reasons, but we can put our finger on at least one direct and immediate cause: Sinking air leads to high-pressure zones, which result in lower humidity, fewer clouds and less precipitation [source: Folger]. Air pollution doesn't do drought any favors either.

Over the past decades, meteorologists have linked drought patterns in the United States to abnormally cool sea surface temperatures in the Pacific tropics -- also known as La Niña conditions. Scientists continue to study this correlation, but we're learning that La Niña can trigger droughts in North America, Europe and Asia [source: Folger].

In a larger geographic and seasonal sense, you can look at drought in four key categories. First up, there's permanent drought, which you find in desert climates where severe water shortage is the norm. Next there's seasonal drought, which refers to a region's seasonal dry spells -- such as the dry seasons experienced in the tropics.

These first two drought categories don't offer any surprises: The dry season is dry, and the desert is a desert. But the next category, unpredictable drought, does. The term refers to the typically brief and irregular dry spells often experienced in humid or subhumid climates.

Finally, there's invisible drought, so named because rain showers tend to mask its severity. It occurs when even frequent precipitation can't keep up with the sweltering summer heat and its correspondingly high levels of evaporation. It looks like you're getting enough rain, but it's actually evaporating too fast to make a difference.

First up, there's meteorological drought, which compares a bout of dryness to typical regional and seasonal weather patterns. A period like this might only interest local weather bugs as it hasn't yet affected the economy or even become all that apparent to the naked eye.

Next up, there's agricultural drought, which focuses on specific crop needs. If a prolonged dry period hurts local crops, then under this definition, drought has reared its ugly head. And indeed, agriculture is generally the first economic sector affected by drought. Life outside the farm may just carry on like normal, but at this point, the weather bugs aren't the only ones shaking their head at the empty rain gauge.

When hydrological drought sets in, everyone else begins to take notice. Both surface and subsurface water supplies drop below normal. This level of drought generally makes itself known in reduced stream flow rates and plummeting lake, reservoir and groundwater levels.

Finally, there's socioeconomic drought, in which extreme dryness begins to affect everyone. It might mean water restrictions, or it might escalate into food shortages, reduced tourism, hampered shipping or even displaced populations.

In underdeveloped portions of the world, drought can easily escalate into starvation, outbreak of disease, panic, political unrest and armed conflict.

The Wages of Drought 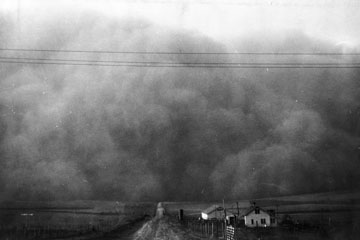 A black blizzard swallows the horizon in 1935.
PhotoQuest/Getty Images

Like many so-called "disasters," drought is only a disaster if you consider it within the context of human civilization. There's nothing insidious about an annual dry season, and shifts in climate have taken place throughout history, turning forest into grassland into desert. Animal populations migrate, less-hardy vegetation dies out and the ecosystem transforms.

But humans skew all of this through their curious habits of living everywhere, growing crops and using way too much water. Think of all the water you use in a day for drinking, hygiene, waste management, recreation, lawn care, home and auto cleaning. On top of that, we cultivate huge fields of fruits and vegetables that depend on irrigation -- and a great deal depends on those crops.

Just consider federally subsidized corn production in the United States. The resulting produce doesn't just wind up on the dinner table covered in butter; it feeds livestock, enters the fuel tank in the form of ethanol and becomes high-fructose corn syrup. So when drought reduces supply, steady demand causes prices to rise. As corn prices rise, so do the prices of products that depend on corn.

Factor in a global commodities market, and you can quickly see how drought in one food-producing part of the world can have global ramifications. South Korea, Japan, Peru, Guatemala, El Salvador, Colombia and much of East Africa all regularly import U.S. corn.

To fully consider the relationship between drought and human civilization, however, you have to consider climate change. The planet's average temperature has risen by 1.4 degrees F (0.78 degrees C) over the past century [source: EPA]. This increase might not sound all that dire at first, but even slow, steady warming boosts the odds of dangerous climate shifts and extreme weather conditions such as flood and drought [source: EPA]. The world has seen an increase in drought length and severity since the 1970s, and we can expect more of the same as Earth's temperatures increase by an estimated 2 to 11.5 degrees F (1.1 to 6.4 degrees C) over the next hundred years [source: EPA].

To a certain extent, the threat of drought is uncertain and unpredictable, yet there are ways to mediate its impact and protect people from its effects. 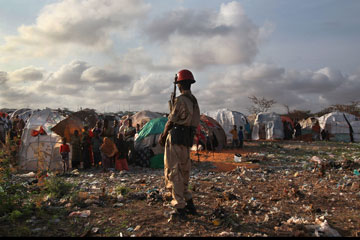 A Somali soldier looks onto a camp for people displaced by famine and drought on Aug. 19, 2011, in Mogadishu, Somalia.
John Moore/Getty Images

So we've established that drought -- at least from a human standpoint -- is pretty bad news. It would make sense, then, to try and predict it, right? Certainly, but then we face the age-old problem of forecasting the weather.

Currently, weather prediction models provide us a good guess at what the weather will do in a given area based on past trends and current conditions. But weather is chaotic, and the atmospheric anomalies that contribute to drought are numerous and unpredictable. As such, scientists can only predict nonseasonal droughts a month or so out. (For more information on the limits of weather prediction, read "How far in advance should I check the weather forecast?")

Can we combat drought? Cloud seeding techniques offer some degree of control of precipitation levels. Cloud seeding involves the use of airborne chemicals to kick-start the formation of clouds in the atmosphere. The American Meteorological Society acknowledges 10 percent increases in post-seeding precipitation, while the United States National Academy of Sciences still isn't convinced [source: Eckhardt].

If we can't predict drought all that well, the least we can do is better prepare. Most drought preparation and mitigation comes in the form of smart, conservative water usage. This tactic incorporates everything from shorter showers and low-volume toilets to drought-resistant planting and improved irrigation systems.

When severe socioeconomic drought ravages a region, relief efforts must often address various symptomatic problems that arise from the drought. For example, national and international humanitarian responses to the 2011 drought in Somalia involved not only food and water to relieve famine but also vaccines, refugee housing, health care and deployment of security forces.

In the end, drought comes down to the weather and water cycles in the environment. Our best bets for coping with it may boil down to water conservation, emergency preparedness and an increased consciousness of changes in Earth's climate.

Interestingly enough, I wrote this article during a drought. But I also wrote it in Atlanta, Ga., so that shouldn't come as much of a surprise. It seems as if we'd been in a near constant state of drought for years now, interspersed with extreme rain that never quite balances the scales.

Of course, there's no excusing the fact that most of us still flush our waste products down the toilet with clean drinking water. Reading about water shortages -- especially potable water shortages -- in other countries really drives home the ridiculousness of it all.