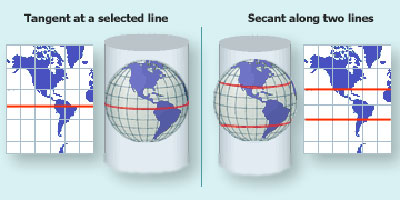 Even though they are easy to fold up and carry around, neither greatly distorted maps nor disassembled globe gores have much practical use. For this reason, cartographers have developed a number of map projections, or methods for translating a sphere into a flat surface. No projection is perfect - they all stretch, tear or compress the features of the Earth to some degree. However, different projections distort different qualities of the map. "All maps have some degree of inaccuracy," Turner explains. "We're taking a round Earth and projecting it onto a two-dimensional surface -- onto a piece of paper or a computer screen -- so there's going to be some distortion." Fortunately, the variety of available projections makes it possible for a cartographer to choose one that preserves the accuracy of certain features while distorting less important ones.

Creating a map projection is often a highly mathematical process in which a computer uses algorithms to translate points on a sphere to points on a plane. But you can think of it as copying the features of a globe onto a curved shape that you can cut open and lay flat -- a cylinder or a cone. These shapes are tangent to, or touching, the Earth at one point or along one line, or they are secant to the Earth, cutting through it along one or more lines. You can also project portions of the Earth directly onto a tangent or secant plane.

Projections tend to be the most accurate along the point or line at which they touch the planet. Each shape can touch or cut through the Earth at any point and from any angle, dramatically changing the area that is most accurate and the shape of the finished map.

Some projections also use tears, or interruptions, to minimize specific distortions. Unlike with a globe's gores, these interruptions are strategically placed to group related parts of the map together. For example, a Goode homolosine projection uses four distinct interruptions that cut through the oceans but leave major land masses untouched.

Different projections have different strengths and weaknesses. In general, each projection can preserve some, but not all, of the original qualities of the map, including:

You can learn more about the specific map projections and their strengths and weaknesses from NASA, the National Atlas of the United States and the U.S. Geological Survey.

Choosing the right projection is just one part of creating a successful map. Another is finding the right data. We'll look at where map information comes from in the next section.