In short, the Milky Way is your home. You live on a planet that revolves around a central star, and this star is just one of 200 to 400 billion bound by gravity to yet another central hub [source: Space.com]. This vast system, some 100,000 light-years across, is a galaxy -- the largest known structure type in the universe [source: HartRAO]. Clouds of gas and dust, pockets of dark matter and hundreds of billions of stars compose its colossal form.

In its overall structure, the Milky Way galaxy is thought to resemble long arms of material spiraling out from a concentrated, oblong core that resembles a horizontal bar. This formation makes the Milk Way a barred spiral galaxy. The galaxy's center is a storm of stars in varying stages of formation and demise, absorbing and releasing enormous amounts of energy. A supermassive black hole forms its center, nearly 4 million times more massive than the sun [source: NASA].

Two major spiral arms, Scutum-Centaurus and Perseus, unwind from the galactic nucleus, each full of young and ancient stars. Two minor arms, Sagittarius and Norma, branch off as well and contain gas and groupings of young stars. The sun burns in the much smaller Orion Arm, located between the Sagittarius and Perseus arms.

The bulk of the Milky Way is visible from Earth as a band of light stretching across the night sky. The ancient Greeks knew this dim spill of stars as the galaxies kuklos or "milk circle." Galileo turned the first telescope to the heavens in 1610 and, like earlier cartographers conceiving the layout of the Earth's surface, astronomers have continued to tweak and expand our understanding of the galaxy ever since.

We don't simply reside in the Milky Way. Each of us is a part of it. Its elements and compounds form our bodies, and its energy crackles through us. Under a starlight sky we are but an insignificant corner in its titanic body, each of us looking back out at the whole.

Beyond the limits of the Milky Way, a vast number of alien galaxies fills the cosmos. Estimates range from 100 billion to 500 billion, meaning that for every star in our own enormous system, there's at least another massive galaxy out there ablaze with the cycle of stellar life and death [source: Cain].

The Man on the Moon Is Calling, Via the First Lunar Cell Network
Our Milky Way Is Warped Like an Old Vinyl Record
This Is a First: An Image of the Sun's North Pole 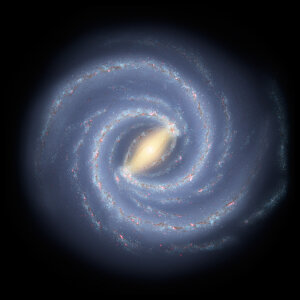