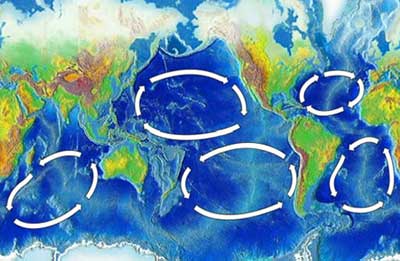 As you've probably gathered by now, wind and water are inseparable. To understand surface ocean currents, which, as their name suggests, occur in the open ocean, you should know a little about the winds that fuel them.

Some of these wind patterns are caused by the Coriolis force. If the earth didn't rotate, wind would travel the globe in straight lines. Instead, the spin of the earth causes winds to seemingly curve to the right in the Northern Hemisphere and the left in the Southern Hemisphere. This curvature of the winds is known as the Coriolis effect.

In the Northern Hemisphere, that means that the strong trade winds that originate in the northeast and blow westward pull the surface of the ocean along with them near the equator. Thanks to the coastline and the Coriolis effect, the warm-water current then heads north, turning at about 30 degrees north latitude. The westerlies take over then, completing the circuit. Blowing from the west, these winds guide the current eastward and south after they hit land. The two wind patterns create a continual circular pattern of wind flowing clockwise in the Northern Hemisphere and counterclockwise in the Southern Hemisphere.

The Gulf Stream, a particularly strong current that is part of the North Atlantic gyre, carries warm water north from the Gulf of Mexico up the coast of the eastern United States and over to western Europe. As a result, lucky Floridians living on the state's east coast are cooler in summer and warmer in winter than surrounding areas, and Western Europe is much warmer than other areas at the same latitude.

If winds affect only the upper 100 meters (328 feet) of water, how are deeper ocean currents formed? Find out on the next page.

Before much was known about ocean currents, sailors would stop their boats for the night only to wake up extremely confused when they found themselves miles away from where they stopped. The Gulf Stream is one current that presented these ancient mariners with many challenges. This especially powerful current is 149 miles (240 kilometers) wide and almost 1 mile (1.6) kilometers deep and can move up to 26 billion gallons of water a second [source: Osher]. That's more than the flow of the Amazon River! [source: MSN Encarta]. The current has caused so many shipwrecks around Cape Hatteras, a piece of land that juts out sharply from the east coast of North Carolina, that the area is called the graveyard of the Atlantic.