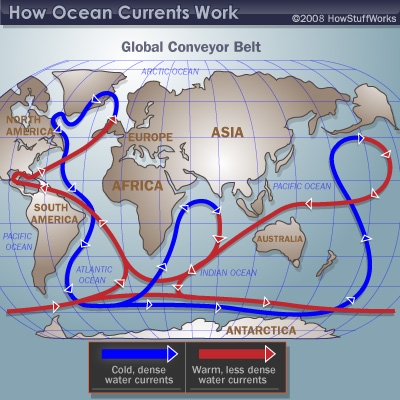 Invisible to us terrestrial creatures, an underwater current circles the globe with a force 16 times as strong as all the world's rivers combined [source: NOAA: "Ocean"]. This deep-water current is known as the global conveyor belt and is driven by density differences in the water. Water movements driven by differences in density are also known as thermohaline circulation because water density depends on its temperature (thermo) and salinity (haline).

Density refers to an object's mass per unit volume, or how compact it is. A heavy, compact bowling ball is obviously going to be denser than an air-filled beach ball. With water, colder and saltier equals denser.

At the earth's poles, when water freezes, the salt doesn't necessarily freeze with it, so a large volume of dense cold, salt water is left behind. When this dense water sinks to the ocean floor, more water moves in to replace it, creating a current. The new water also gets cold and sinks, continuing the cycle. Incredibly, this process drives a current of water around the globe.

The global conveyor belt begins with the cold water near the North Pole and heads south between South America and Africa toward Antarctica, partly directed by the landmasses it encounters. In Antarctica, it gets recharged with more cold water and then splits in two directions -- one section heads to the Indian Ocean and the other to the Pacific Ocean. As the two sections near the equator, they warm up and rise to the surface in what you may remember as upwelling. When they can't go any farther, the two sections loop back to the South Atlantic Ocean and finally back to the North Atlantic Ocean, where the cycle starts again.

The global conveyor belt moves much more slowly than surface currents -- a few centimeters per second, compared to tens or hundreds of centimeters per second. Scientists estimate that it takes one section of the belt 1,000 years to complete one full circuit of the globe. However slow it is, though, it moves a vast amount of water -- more than 100 times the flow of the Amazon River. [source: NOAA: "Currents"].

The global conveyor belt is crucial to the base of the world's food chain. As it transports water around the globe, it enriches carbon dioxide-poor, nutrient-depleted surface waters by carrying them through the ocean's deeper layers where those elements are abundant. The nutrients and carbon dioxide from the bottom layers that are distributed through the upper layers enable the growth of algae and seaweed that ultimately support all forms of life. The belt also helps to regulate temperatures.

Read on to learn about a current that isn't caused by winds or density differences but by forces that are out of this world.

A well-known density-driven current occurs where the saltier Mediterranean Sea empties into the Atlantic Ocean. During World War II, submarines used this current to enter and leave the Mediterranean without even turning on their engines!