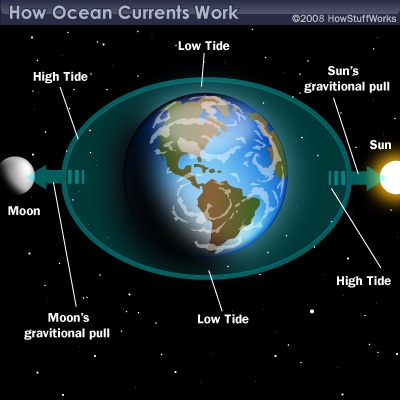 Tidal currents, as their name suggests, are generated by tides. Tides are essentially long, slow waves created by the gravitational pull of the moon, and to a lesser degree, the sun, on the earth's surface. Since the moon is so much closer to the earth than the sun, its pull has more influence on the tides.

The moon's gravitational pull forces the ocean to bulge outwards on opposite sides of the earth, which causes a rise in the water level in places that are aligned with the moon and a decrease in water levels halfway between those two places. This rise in water level is accompanied by a horizontal movement of water called the tidal current.

Tidal currents differ from the currents previously mentioned in that they don't quite flow as a continuous stream. They also switch directions every time the tide transitions between high and low. Although tides and tidal currents don't have much impact in the open oceans, they can create a rapid current of up to 15.5 miles (25 kilometers) per hour when they flow in and out of narrower areas like bays, estuaries and harbors [source: Skinner]. Fast tidal currents toss sediment around and affect plant and animal life. Currents may, for example, transfer a fish's eggs from an estuary out into the open sea or carry nutrients that the fish needs from the sea into the estuary.

Currents, whether tidal, surface or deep ocean, profoundly affect the world as we know it. To learn more about the complex systems that drive ocean currents, dive into the links below.

A few lesser-known surface currents are nevertheless responsible for some significant events. The warm, eastward-flowing, equatorial counter current, for example, can trigger the weather pattern known as El Nino. A colder surface current, the Labrador current, flows along the west coast of Greenland and often sends icebergs into the North Atlantic shipping lanes. This current is responsible for causing the sinking of the Titanic. [Source: NOAA: "Ocean"]