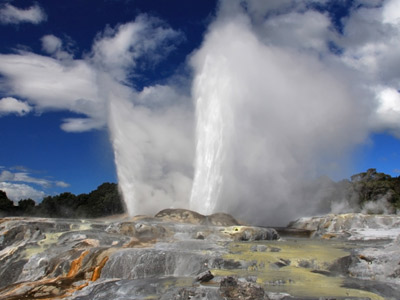 The Pohutu Geyser in New Zealand erupts with a natural blast of the Earth's interior heat.
­iStockphoto.com/Animean

­We depend on our cars to take us to work and get our children to school. We rely on our home heating systems to keep us warm in the winter. We take it for granted that we can easily switch on our computer, vacuum cleaner or oven.

Yet scientists say the sources of energy we need to power all these modern conveniences are running dangerously low. We could run out of oil in as little as 40 years, and out of natural gas soon after that [source: The Independent]. These fossil fuels have been percolating beneath the Earth for hundreds of millions of years, and once they're gone, they're going to take millions more years to replenish. Not only are we running out of fossil fuels, but they're adding to our environmental woes by releasing nasty byproducts that increase pollution and contribute to global warming.

­Scientists are running a race against time to find cleaner, more efficient, renewable sources of energy. One potential source that we've barely tapped is right underneath our feet. Deep inside the Earth lies hot water and steam that can be used to heat our homes and businesses and generate electricity cleanly and efficiently. It's called geothermal energy -- from the Greek words geo, or "earth," and therme, meaning "heat."

There is plenty of heat in the center of the Earth. The deeper you dig, the hotter it gets. The core, about 4,000 miles (6,437 kilometers) beneath the surface, can reach temperatures of 7,600 degrees Fahrenheit (4,204 degrees Celsius). Part of that heat is left over from the Earth's formation, about 4 billion years ago. The rest comes from the constant decay of radioactive isotopes inside the Earth.

­The heat inside the Earth is intense enough to melt rocks. Those molten rocks are known as magma. Because magma is less dense than the rocks surrounding it, it rises to the surface. Sometimes magma escapes through cracks in the Earth's crust, erupting out of volcanoes as part of lava. But most of the time magma stays beneath the surface, heating surrounding rocks and the water that has become trapped within those rocks. Sometimes that water escapes through cracks in the Earth to form pools of hot water (hot springs) or bursts of hot water and steam (geysers). The rest of the heated water remains in pools under the Earth's surface, called geothermal reservoirs.

How Can We Use Geothermal Energy?

Heat is sitting under the Earth -- we just need to tap it. Geothermal energy can be used in three ways:

­Direct geothermal energy. In areas where hot springs or geothermal reservoirs are near the Earth's surface, hot water can be piped in directly to heat homes or office buildings. Geothermal water is pumped through a heat exchanger, which transfers the heat from the water into the building's heating system. The used water is injected back down a well into the reservoir to be reheated and used again.

Geothermal heat pump. A few feet under the ground, the soil or water remain a constant 50 to 60 degrees Fahrenheit (10-15 degrees Celsius) year-round. Just that little bit of warmth can be used to heat or cool homes and offices. Fluid circulates through a series of pipes (called a loop) under the ground or beneath the water of a pond or lake and into a building. An electric compressor and heat exchanger pull the heat from the pipes and send it via a duct system throughout the building. In the summer the process is reversed. The pipes draw heat away from the house and carry it to the ground or water outside, where it is absorbed. 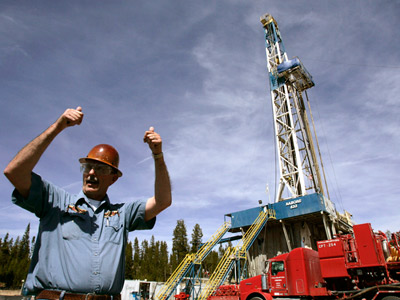