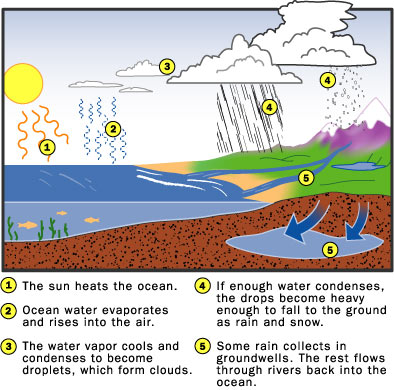 Hydropower plants take advantage of a naturally occurring, continuous process -- the process that causes rain to fall and rivers to rise. Every day, our planet loses a small amount of water through the atmosphere as ultraviolet rays break water molecules apart. But at the same time, new water is emitted from the inner part of the Earth through volcanic activity. The amount of water created and the amount of water lost is about the same.

At any one time, the world's total volume of water is in many different forms. It can be liquid, as in oceans, rivers and rain; solid, as in glaciers; or gaseous, as in the invisible water vapor in the air. Water changes states as it is moved around the planet by wind currents. Wind currents are generated by the heating activity of the sun. Air-current cycles are created by the sun shining more on the equator than on other areas of the planet.

Air-current cycles drive the Earth's water supply through a cycle of its own, called the hydrologic cycle. As the sun heats liquid water, the water evaporates into vapor in the air. The sun heats the air, causing the air to rise in the atmosphere. The air is colder higher up, so as the water vapor rises, it cools, condensing into droplets. When enough droplets accumulate in one area, the droplets may become heavy enough to fall back to Earth as precipitation.

The hydrologic cycle is important to hydropower plants because they depend on water flow. If there is a lack of rain near the plant, water won't collect upstream. With no water collecting up stream, less water flows through the hydropower plant and less electricity is generated.