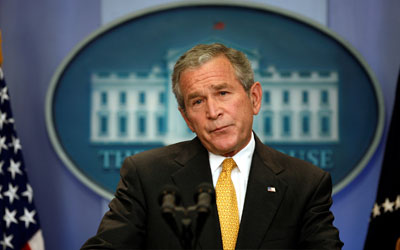 On July 14, 2008, President George W. Bush lifted the executive ban on offshore drilling. He urged the U.S. Congress to do the same in an effort to reduce oil prices.
Aude Guerrucci-Pool/Getty Images

With gas prices hitting record highs, people are looking high and low -- and offshore -- for a way to bring the costs down. But according to a study by the Energy Information Association (EIA), they may want to look elsewhere. Even if the outer continental shelf (OCS) were opened to drilling, the study found, it would be several years before the country saw any oil. Even then, the amount of oil probably wouldn't be enough to influence the global market [source: EIA].

The EIA gathered its data by preparing a test case to see what would happen if the current ban on offshore drilling was allowed to expire in 2012. Historically, the ban on drilling the OCS in the Pacific, Atlantic and most of the eastern Gulf of Mexico has been reinstated each time it expires, but the EIA wanted to see what might happen if it weren't.

What the group determined contrasts sharply with the assertions coming from many politicians and oil executives about increased domestic supply bringing prices down. Instead, the EIA found that the increased drilling would have little impact before 2030. In fact, because of the technicalities involved in leasing wells, pinpointing where the oil is and actually getting that oil to the surface, production probably wouldn't even start until 2017. And according to the EIA study, even once the oil is flowing, the increased access would bring only 0.2 million barrels per day more than if the ban were still in place [source: EIA].

Despite the time lag, proponents of drilling say there's no time like the present. If the government hadn't banned offshore drilling back in 1982, they argue, much of that oil would already be on the world market. Some also argue that the simple act of legalizing offshore drilling might influence the market to lower prices. Even if the effects aren't immediate, they continue, drilling should begin now if Americans don't want to see their gas prices climb higher.

Not to burst their oil bubble, but many economists counter that since oil prices are determined on a global market, a country has to make some serious additions for its actions to make any appreciable difference. To really affect prices, the United States would have to add significantly to the worldwide production of oil. Considering that the world produces 82.5 million barrels of oil each day, adding 0.2 million barrels isn't really going to have much of an impact [source: EIA].

Not to mention the fact that accessing oil reserves thousands of feet underwater and an additional thousands of feet under the seafloor takes considerable time and money. According to the EIA's report, much of the oil that's currently off limits wouldn't even be economically worth developing at current prices [source: EIA].

­Monetary costs aren't the only costs involved in this controversy, though. Find out about envir­onmental consequences next.

According to the Center for Economic and Policy Research, the U.S. might do better to focus on raising fuel efficiency standards rather than sinking more wells into the ground. While the government increased the efficiency standards an average of 1.1 mpg a year from 1980 to 1985 -- to 27.5 mpg for cars and 19.5 mpg for light trucks -- it did little until 2007. If, instead, the government had continued raising the standards at a rate of 0.4 mpg each year, cars would be at least 50 percent more fuel efficient. The savings add up to approximately 3.3 million barrels per day -- quite an improvement over offshore drilling's estimated 0.2 million [source: Baker and Szembrot].