The Future of Plasma Waste Converters 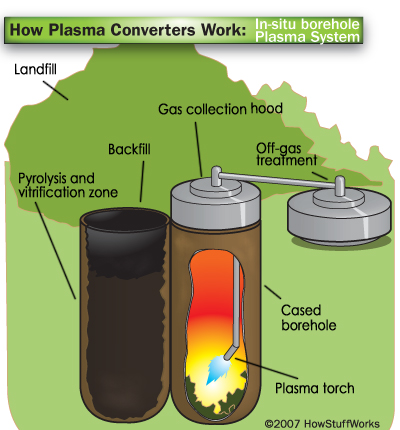 Dr. Hillestad of GeoPlasma calls the present the "perfect storm" for plasma gasification technology. With focus increasing daily on mankind's environmental impact and the growing concern to look to renewable energy resources, plasma plants are well positioned to become an important part of how we generate power and deal with waste.

Potential uses for this technology (apart from new plasma waste treatment plants) include:

Dr. Circeo proposes the creation of a portable plasma gasification system to treat existing landfills without building an entire plant. Instead of a stationary furnace and gas treatment facility, he suggests boring holes into existing landfills, sticking a plasma torch into the hole, and capping the hole with a gas capture system. The landfill itself would act as the furnace vessel. Since plasma gasification is not a combustion process, the landfill contents would either gasify or vitrify, with no danger of fire.

Another option that would significantly reduce the price of a plasma plant is the co-location of the plasma gasification chamber with a pre-existing power facility. Because the amount of gases produced by plasma plants is relatively small when compared to coal or oil-fired power plants, the power generators in plasma plants are smaller and less efficient (larger generators require much more gas). Coal and oil power plants use the same processes as plasma plants to treat gases and generate power. By connecting a line from a plasma gasification furnace to a coal or oil furnace, you eliminate the need for a plasma plant's gas treatment equipment, which make up approximately 50 percent of the overall cost of building a plasma waste treatment facility. The gases from the plasma furnace would combine with the gases in the coal or oil furnace. The relatively clean gases from the plasma furnace would help boost efficiency and reduce the amount of coal or oil needed to generate power.

The intense heat from plasma torches can completely neutralize the hazardous components found in diseased livestock or contaminated soil. Engineers could transport modular, portable plasma facilities to dispose of animal carcasses or treat soil on site. Incineration of such hazardous material doesn't always destroy all the contaminates, or produces ash that is also hazardous waste. Plasma gasification would destroy or render inert any harmful material.

To learn more about plasma waste converters, check out the links below.