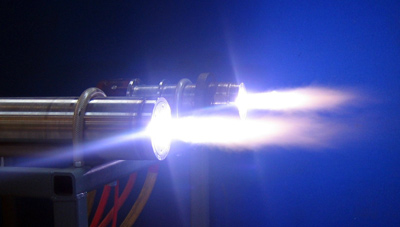 Remember the scene in Back to the Future where Doc Brown throws garbage into Mr. Fusion, powering his time machine? While household fusion is still in the realm of science fiction, we might be closer than you think to generating electricity for our homes using trash, and plasma waste converters will do the job.

At the most basic level, a plasma waste converter is a plasma torch applied to garbage. A plasma torch uses a gas and powerful electrodes to create plasma, sometimes called the fourth state of matter. Plasma is an ionized gas; in other words, it's a gas with free-roaming electrons that carries a current and generates a magnetic field. On Earth, we can see natural displays of plasma fields in lightning. The temperatures generated by a plasma torch can be hotter than the surface of the sun (more than 6,000 degrees Celsius).

At these temperatures, garbage doesn't stand a chance. Molecules break down in a process called molecular dissociation. When molecules are exposed to intense energy (like the heat generated by a plasma torch), the molecular bonds holding them together become excited and break apart. What's left are the elemental components of the molecules. With cyanide, for example, you'll end up with atoms of carbon and nitrogen.

Organic molecules (those that are carbon-based) become volatilized, or turn into gases. This synthetic gas (syngas) can be used as a fuel source if properly cleaned. Inorganic compounds melt down and become vitrified, or converted into a hard, glassy substance similar in appearance and weight to obsidian. Metals melt down as well, combining with the rest of the inorganic matter (called slag).

Unlike incinerators, which use combustion to break down garbage, there is no burning, or oxidation, in this process. The heat from plasma converters causes pyrolysis, a process in which organic matter breaks down and decomposes. Plasma torches can operate in airtight vessels. Combustion requires oxidization; pyrolysis does not.

Plasma waste converters can treat almost any kind of waste, including some traditionally difficult waste materials. It can treat medical waste or chemically-contaminated waste and leave nothing but gases and slag. Because it breaks down these dangerous wastes into their basic elements, they can be disposed of safely. The only waste that a plasma converter can't break down is heavy radioactive material, such as the rods used in a nuclear reactor. If you put such material in a plasma furnace, it would probably catch on fire or even explode.

In the upcoming sections, we will look at what makes up a typical plasma waste converter, examine the byproducts produced from the gasification process, and discuss the benefits and concerns about plasma converters.

Thanks to Dr. Louis Circeo of Georgia Tech, Dr. Hilburn Hillestad and Crinu Baila of GeoPlasma and Bill Haynes of Energy Systems Group for their assistance with this article.