When will we run out of oil, and what happens then? 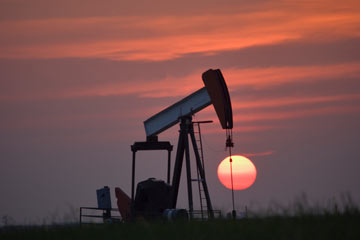 Oil is the lifeblood of the modern world, and the combustion engine its indomitable heart. In 2009, oil wells around the world pumped an estimated 84 to 85 million barrels out of the Earth, and countries consumed just as much [source: EIA]. At this rate, how long can we go on pumping fossil fuels out of the ground without exhausting our supplies?

Naturally, we can't tap and drain an entire planet's worth of oil from a single well. Countless oil wells pox Earth's surface: some active, some long drained. Each oil well follows a production bell curve, with output rising, stabilizing and then declining to nothing over a period of years. This is called the Hubbert Curve, proposed in 1956 by Shell geologist M. King Hubbert.

Before this gradual downfall begins, however, we'll reach a point known as peak oil. Imagine a carafe filled with coffee. Imagine pouring cup after cup without effort until the stream of java begins to trickle. Eventually you even have to severely tilt the carafe in order to drain the dredges. Peak oil is that last full and flowing cup before the final decline begins. Demand continues to grow, while the Earth's nonrenewable oil reserves dwindle.

Individual nations have already reached peak oil. U.S. production peaked in 1971 and has been in decline ever since [source: EIA]. As global oil production appears to have plateaued in 2005, some analysts say the world has already peaked. Fredrik Robelius of the Uppsala Hydrocarbon Depletion Study Group, however, predicts it will peak sometime between now and 2018 [source: ASPO].

Other estimates are far less severe. In 2006, the Cambridge Energy Research Associates (CERA) predicted that 3.74 trillion barrels of oil remained in the Earth, three times that estimated by peak oil proponents. CERA predicted that global oil production would hit a decades-long "undulating plateau" around the middle of the 21st century.

More optimistic views of this inevitable post-peak world involve a lot more preparation. Basically, the impact of oil shortages can be lessened by decreasing our reliance on fossil fuels. Alternative energy sources and renewable biofuels play a crucial role in these outlooks. Some commentators even go so far as to see eventual oil shortfalls as a stabilizing factor in world politics [source: Drezner].

The writing is on the wall. Global oil supply can't meet global oil demand forever, necessitating new energy sources and usage practices. Even if technology allowed us to harvest every last drop of oil in the planet, increasing scarcity and rising prices would necessitate widespread change long before we actually ran out of oil.