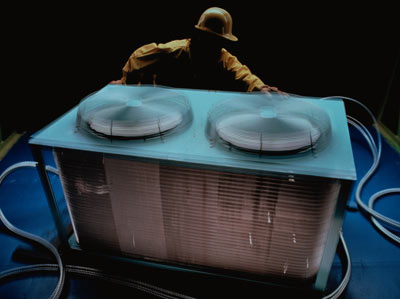 One form of thermal technology has to do with climate control units, such as this rooftop air conditioning unit.
Wayne Calabrese/Photonica Collection/Getty Images

Whenever the cost of gas starts burning holes in our wallets, we start paying closer attention to the development of alternative energy technology. Right now, one of those up-and-coming technologies is thermal technology, which uses one of the most common forms of energy: heat.

To understand the technology, we have to know a little about thermodynamics, which is the study of the laws that govern the movement of heat. Although the word may seem intimidating, we already understand the basics of thermodynamics through common sense. For instance, we know that if we were to put a hot cup of coffee in a freezer, it wouldn't take long for the coffee to cool down. This is because heat travels from hot things to cold things. The heat travels from the hot coffee and escapes into the freezing cold air and will continue until the air and the coffee are the same temperature.

The term thermal technology can be a confusing one because people use it so broadly. Generally, when people use the term "thermal technology," they mean the ways we can use heat to do what we want. For instance, some people use the term thermal technology to refer to climate control -- for example, stopping the movement of heat with insulation, or changing the temperature in a room. Because heat always wants to travel from hot to cold, it's difficult to make it go in the other direction. In fact, it's impossible according to the laws of thermodynamics. Air conditioning units, however, use special fluids that can work within these laws to make a room colder. Read "How Air Conditioners Work" to learn how they do this.

Some electronics, such as thermal fax machines are also said to use thermal technology. These electronics use heat to do their job, as opposed to climate control units, which move heat around to do their jobs. A thermal fax machine, for example, generates heat from electricity in its print head. Then, it applies this heat to special thermal paper or through a transfer ribbon to print faxes. This method makes for a simple, durable fax machine that doesn't even need ink cartridges to work.

Turning heat into useful energy is difficult, but advancements in the field of thermal technology have made it more possible than ever before. Perhaps the most exciting application of thermal technology has to do with capturing the sun's heat to produce electricity. Next, we'll find out how this is possible and why some believe it's the energy of the future. 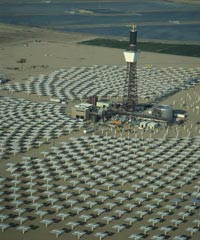 Browse the resources on the next page to learn more about renewable energy.