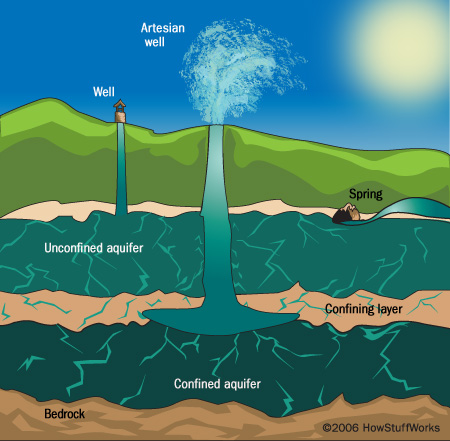 You can usually figure out what's in a bottle of water by the stated water type -- the FDA regulates the use of terms like "spring water" and "purified water." There are six primary bottled-water types, and several more variations that combine a couple of the basics:

Of the basic types of bottled water, the only one required by definition to undergo further treatment once it's drawn from the source (or purchased from the municipal water supply) is purified water. The most common treatment processes for purified water include:

Aquafina is an example of purified drinking water. It begins as municipal tap water and then undergoes a treatment process that Aquafina calls the "HydRO-7(tm) purification system." Here is the HowStuffWorks interpretation of Aquafina's marketing-friendly description of the HydRO-7(tm) process:

This animation shows the ideal -- nothing's left at the end of the purification process except H20. But according to Aquafina, what's left is actually 4 parts per million (ppm) of total dissolved solids -- still significantly less than the FDA regulation stating that purified water should have no more than 10 ppm of TDS.

In the next section, we'll examine some of the regulations affecting bottled water and find out how they compare to EPA standards for tap water.

As far as the U.S. Food and Drug Administration (FDA) is concerned, "bottled water" is water intended specifically for drinking by humans, does not include any added carbonation or flavoring and is packaged in a sanitary, food-grade container.