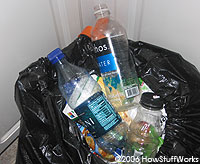 In a single year, manufacturers around the world use about 2.7 million tons of plastic to bottle water. Most of those bottles are a type of plastic called polyethylene terepthalate, or PET, which is produced from crude oil. To produce bottles to meet yearly bottled-water demand in the United States alone requires 1.5 million barrels of oil. That much oil could power about 100,000 cars for a year, according to the Earth Policy Institute.

And almost 90 percent of bottled-water bottles end up in the trash or on the ground, not in recycling bins. They can take up to 1,000 years to degrade, and when they do, they can leak harmful chemicals into the ground, contaminating ground water -- ironically inducing a new cycle of pollution that means bottled water may actually be a necessity in the United States some day. Some companies, like the Colorado-based BIOTA bottled-water company, are making a concerted effort to reduce their effect on the environment. BIOTA uses a corn-based, biodegradable plastic bottle that can take fewer than three months to degrade in a compost pile.

But lack of recycling isn't the only issue. Of the roughly 10 percent of bottles that do get recycled, most aren't much help in offsetting the energy consumed and pollution produced by the original manufacturing and transportation process. There are so many types of plastics that the containers are extremely hard to sort, so recycling them is very expensive. As a result, a lot of recycling companies in the United States won't do it. Most recycling of plastic bottles ends up happening overseas, particularly in China. Those billions of bottles have to be shipped there, meaning even more energy is consumed to get the bottles to the point of recycling. And once they are broken down for re-use, manufacturers are typically not able to build a bottle out of recycled plastic alone. A "recycled" plastic bottle has far more virgin plastic in it than recycled plastic.

Of course, in parts of the world where potable water is not readily available, bottled water is an excellent option despite any environmental concerns. People need to drink. But when drinking water is drawn from good sources, bottled and branded, shipped to places where potable water is readily available from the tap and consumed by people who have easy access to that tap, it can be argued that a natural resource is being depleted in the name of business. Some towns and villages have reported that within months of a bottled-water company setting up shop in their neighborhood and tapping into underground water supplies, their own wells have run dry. However, because aquifer geology is not an exact science, it's always hard to prove that the bottled-water company is in fact tapping the same source as the community well, so the claims typically go unaddressed outside the environmentalist community.

Whether we'll eventually run out of public water supplies remains to be seen. In the meantime, go to the trendiest restaurant you know and ask the water sommelier which type of water to drink with your salad course. If she says "Evian," ask if she has New York City tap water instead. Evian came in last in that taste test.

For more information on bottled water and related topics, check out the links below.