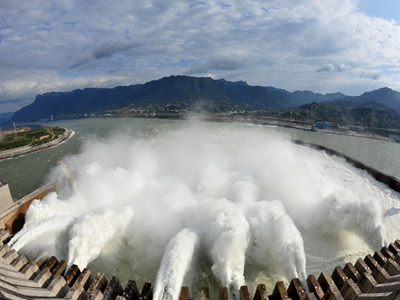 The Three Gorges Dam has already been linked to environmental problems, if not earthquakes.
­AP Photo/Xinhua, Du Huaju

­Until recently, the most powerful earthquake attributed to dam activity happened in western India in 1967. Three years after builders completed the Koyna Dam, a 6.5-magnitude earthquake hit the area, killing 180 people.

The phenomenon of dam-triggered earthquakes is known as reservoir-induced seismicity. It's not well-understood, but basically what happens is this:

When a dam is built and the reservoir filled with water, the amount of pressure exerted on the earth in that area changes dramatically. When the water level of a reservoir is raised, pressure on the underlying ground increases; when the water level is lowered, the pressure decreases. This fluctuation can stress the delicate balance between tectonic plates beneath the surface, possibly causing them to shift.

Another factor is the water itself. When the water pressure increases, more of it is forced into the ground, filling cracks and crevices. All of this water pressure can expand those cracks and even create new, tiny ones in the rock, causing greater instability below ground. What's more, as the water sinks deeper, it can act as sort of a lubricant for rock plates that are being held in place by friction alone. The lubrication can cause those plates to slip.

In the case an earthquake, it's difficult to prove beyond a doubt that the culprit was a dam. It's just so hard to know exactly what's going on beneath the surface, with so many factors at work. In the case of the 2008 Sichuan earthquake, for instance, the jury is still out. While 730 minor earthquakes were recorded within the first year of the Zipingpu reservoir's first filling in 2004, most scientists agree it'll take a lot more research before the Zipingpu Dam can be conclusively linked to the big one [source: LaFraniere].

One thing we do know, however, is that a dam cannot cause an earthquake all by itself. The risk factors, specifically unstable fault lines, have to be there already. With the right conditions in place, though, a damn can trigger the event earlier than would have happened naturally, and perhaps even increase its magnitude -- which is why it's so dangerous to build a dam over a known fault.

And it's why so many scientists are warning of terrible results of China's Three Gorges Dam, which is built over the Jiuwanxi and the Zigui-Badong fault lines. Some say it's only a matter of time before the dam triggers a major earthquake, possibly like the one in Sichuan Province in 2008.

For more information on dam-triggered earthquakes and related topics, look over the links below.