Taking the "Natural" out of "Natural Disaster" 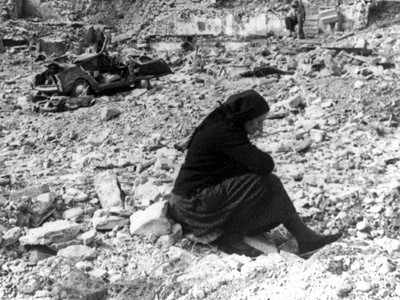 A woman sits amid the rubble of what was once the village of Longarone, below the Vaiont Dam in Italy.
AP Photo

Building a dam is a massive feat of engineering. They are huge structures, and their reservoirs hold vast amounts of water. The Zipingpu Dam, for instance, is 50 stories tall; its reservoir is capable of storing more than a billion cubic meters of water from the Minjiang River. The weight and lubricating characteristics of that water may have triggered the 2008 earthquake.

­When people dam a river, and expand and contract its water volume with a reservoir, those natural characteristics change -- sometimes quickly and dramatically. We're more familiar with these ­changes being expressed through landslides, when water loosens the ground supporting mountainous rock, and the seasonal raising and lowering of reservoir water depth puts fluctuating strain on the earth. One of the deadliest landslides in history, in northern Italy in 1963, wiped out an entire village of 2,500 people. It occurred when 400 million cubic yards (300 million cubic meters) of mountain rock fell into Vaiont reservoir, and the resulting tidal wave dwarfed the 856-foot-tall (261-meter) dam, washing away the town downstream [source: IR].

Literally dozens of landslides in China have been attributed to the building of the Three Gorges Dam across the Yangtze River [source: Hvistendahl]. In 2003, a month after the initial filling of the reservoir, a landslide in the area killed 14 people. Dozens more landslides occurred in 2006 after the water level was raised again, and another in 2007 buried a bus.

­The mechanisms at work when damming a river triggers a landslide are similar to those that can cause an earthquake. But in the case of the earthquake, the effects are occurring well below the surface.