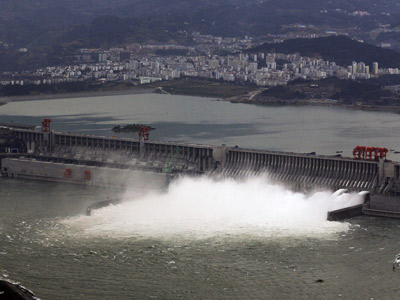 The Three Gorges Dam on the Yangtze will generate a lot of power, but at what cost?
Chen Zhuo/ChinaFotoPress/­Getty Images

­Is it a feat of mo­dern engineering, or an environmental disaster in the making? China's Three Gorges Dam project has the potential to be both, depending on whether you talk to government officials or environmentalists. According to the Chinese government, Three Gorges is the solution to two of the country's biggest problems -- flood control and energy production. Yet many scientists say the dam could have devastating implications, including water pollution, earthquakes, landslides and the destruction of natural species and historical sites.

Three Gorges is an engineering marvel. When fully constructed and operational in 2009, it will surpass Brazil's Itaipu Dam to become the largest and most powerful hydropower project in the world.

Once completed, this $24 billion concrete dam will extend 1.5 miles (2.4 kilometers) across the river, and reach heights of more than 600 feet (183 meters) [source: Hvistendahl]. It will create a reservoir nearly 400 miles (644 kilometers) long (about the distance from Los Angeles to San Francisco) along the Yangtze, the third-largest river in the world. It will have the capacity to store 5 trillion gallons (18 trillion liters) of water [source: PBS].

The dam will house 26 turbine generator units, which will produce 18,000 megawatts of energy -- eight times the energy produced by the Hoover Dam, and enough to power 18.2 million homes and provide one-ninth of China's total power [sources: Hvistendahl, International Rivers, PBS].

Construction on the dam began in 1994 and was finished in October 2006. Three Gorges is set to be fully operational in 2009 -- four years ahead of schedule.

The original intent of Three Gorges Dam was for flood control. Over the past 2,000 years, there have been more than 200 catastrophic floods along the Yangtze's banks [source: PBS]. The dam is also needed to provide an important source of energy for a rapidly growing and modernizing society. China is the second-largest energy consumer in the world, just behind the United States. Right now 70 percent of its energy comes from coal [source: Energy Information Administration]. Over the next decade China aims to expand its use of alternative energy sources such as solar, nuclear and wind power. Hydropower will play a big part in that push for cleaner energy.

­Finally, Three Gorges will serve as a symbol of China's engineering might -- a massive construction project on a scale never before seen. The Chinese are hoping that Three Gorges will become a major tourist attraction.