by Chris Warren
NEXT PAGE 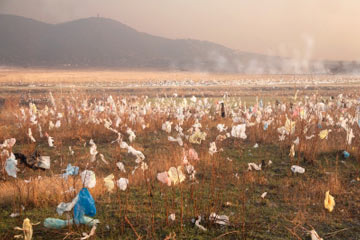 Tony Kingsbury knows what it's like to face a skeptical audience. As a professor in the sustainable products and solutions program at the University of California at Berkeley's Haas School of Business, he's often asked to address groups of students and citizens about sustainability. When he addresses one particular topic in this famously liberal city -- the wisdom of using paper bags instead of plastic -- he knows exactly what his audience thinks before he even opens his mouth.

"People complain about plastic bags. People love to hate them," he says. But, he adds, they may not know the whole story.

Indeed, plastics bags are more at home in laboratories than in forests. They're made up of resins or polymers -- plastic, resin and polymer are used interchangeably -- as are the many other plastic products that have become part of our daily lives. So before Kingsbury explicitly begins addressing the environmental benefits and drawbacks of each, he polls his audience about the key attributes of sustainability, metrics such as the energy, water and land required to make each type of bag. Then, he gets ready to shock them.

Kingsbury says that those who examine the two options side by side using this sort of analysis are invariably surprised that paper is not the clear-cut winner -- not by a long shot. "Plastic wins on everything except for one: litter," he says. "Trees don't turn themselves into bags. They require lots of processes and water and land burdens."

Granted, the one realm in which plastic bags are environmentally more harmful than paper is a huge one. Bags that aren't recycled clog landfills and often end up in rivers and the ocean, where they can be ingested by fish, birds and other creatures [source: Mieszkowski]. Thousands and thousands of birds and marine animals perish each year from either ingesting or getting caught up in the billions of plastic bags that Americans use each year. The bags have even been deemed enough of a problem that cities like Santa Monica and San Francisco, Calif., along with nations like Italy, have largely banned them.

Kingsbury argues that the litter problem related to plastic bags is all about human behavior; if people recycled plastic bags, the environmental problems would be vastly reduced. But the even larger point here is that plastics have a more nuanced impact on the environment than many people imagine. Take, for instance, the new 787 airplane, which is made with a high-tech resin reinforced with carbon fibers instead of aluminum. Because it is lighter than it would be if it were made of metal, the plane uses less fuel, thereby reducing its emissions.

While there are downsides and negative effects associated with resins, the environmental impacts of the plastics that are used in everything from the milk and soda bottles that hold beverages to the clothes we wear are more complicated than you might imagine.