How can we speed up plastic photodegradation? 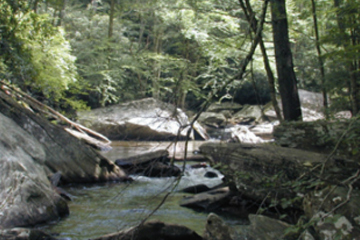 Few populated places look quite this pristine, but if only our littered plastics would degrade on their own, the environment might be prettier and safer. See more green science pictures.
Courtesy GXT Green

Plastics are some of the most useful and moldable materials ever created by humankind. Yet one of their outstanding characteristics -- durability -- also makes them a potential long-term pollutant.

It doesn't take much to see the visual impact of discarded plastics. All around us, in cities and the countryside, plastic litter is evident in the form of old bottles, grocery bags, electronics packaging and much more. Those plastics aren't going away anytime soon.

That's because no natural processes decompose plastic. And as such, No one can honestly say they know for sure how long plastic debris lasts. Estimates range into hundreds and even thousands of years. That's because plastics are synthetic, petroleum-based polymers. Polymers are large chains of molecules, and in the case of plastics, they are just too gargantuan for microbes to even begin to attack.

Some manufacturers integrate additives into plastics to make them biodegrade in landfills and the environment. These organic additives attract bacteria, fungi and other microbes, which slowly acclimate to the plastic and break it down into organic molecules with various combinations acids and enzymes. But the majority of plastics don't have these additives, so they're nearly impervious to microbial attacks.

However, ultraviolet light can and does cause plastic to disintegrate, through a process called photodegradation. Photodegradation is the breakdown of complex materials into simpler ones due to light exposure.

The world might be a much cleaner place if all plastics would just vanish in sunlight. Keep reading and you'll see just how realistic this kind of plastics technology is. 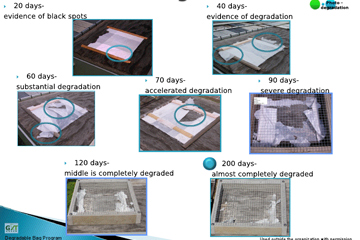 Thanks to degradable additives, these plastic bags break down in less than a year when exposed to sunlight
Courtesy GXT Green

Like human skin, plastics are susceptible to degradation due to ultraviolet (UV) light from the sun. Solar UV light that reaches our planet's surface has a wavelength between 280 and 400 nanometers, so it's not visible to the human eye, which sees light in wavelengths from roughly 390 to 750 nanometers.

Old-school plastics aren't particularly sensitive to sun exposure and as such, they could last for a very long time even in direct sunlight. However, with some clever molecular manipulation, or by integrating additives, engineers can make plastics that photodegrade much more quickly.

The carbonyls are types of organic compounds that are interlaced with plastic molecules. Other additives include metal salts, such as iron, cobalt, nickel which help to initiate a two-stage degradation process.

In the first stage, the additives absorb UV light and cause weak links in the polymers, so those big synthetic molecules get weaker and weaker. The second stage of the process happens as environmental factors like wind and waves bash and abuse the product, which leads to its eventual crumbling.

Blending plastic resins and additives takes trial and error, as engineers balance strength and non-toxicity, as well as degradation rates. 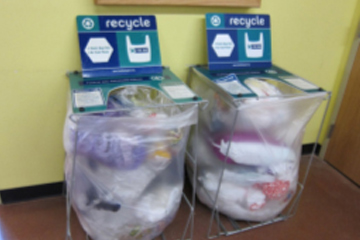 Many grocery stores accept plastic bags for recycling, which is always preferable to sending plastics into a landfill.
Courtesy GXT Green

Photodegradable products react differently depending on many factors. The intensity of the UV radiation affects the rate of photodegradation. That means shade, cloud cover, and geographic location play a role in how much UV reaches that diaper your friend just flung out the car window.

The reality, though, is that most plastics won't see much time sunning on the beach. When a plastic product's use is complete, it usually winds up in a landfill or scattered in our environment. Only about 8 percent of plastics are recycled [source: EPA]. So when you consider that the United States alone creates more than 30 million tons of plastics each year, location matters, especially in terms of photodegradation.

In some cases, these light-sensitive plastics will break down in a landfill, but only if they receive a good dose of UV before they're plowed under. Other photodegradable plastics remain totally intact for untold years once they hit your local landfill. What's more, even those that totally disintegrate in the wild are often consumed by other organisms and as a result, can wiggle their way into our own food chain. No one can say for sure that the effects of plastics consumption are totally benign.

Currently, photodegradable kinds of plastics are really useful in situations involving littering -- intentional or otherwise. So for grocery sacks that blow into Grand Teton national park, at least there's hope that the sun will eventually take its toll.

In the end, this kind of degradable plastic is just one type of solution to a big problem: How do we humans deal with all of the plastic garbage we create? Right now, reusing and recycling are our best options, but in when plastics do go on jailbreaks and escape into the world, it's good to know that degradable plastics might not last as many generations as older types of polymer materials.

In 1960, plastics comprised only about 1 percent of solid waste in the United States. Now, that number is more like 12 percent. Most of these plastics go straight to the dump after we use them, a fact that highlights extreme wastefulness -- especially when you consider that plastics are easy for manufacturers to melt and reuse for new products.

Degradable plastics are a good tactic in our overall strategy for waste management. That's especially true for the roughly 4 billion plastic bags that become litter every year around the globe. But when it comes to long-term sustainability, we're better off recycling and reusing materials instead of constantly disposing of them.