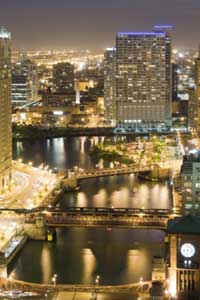 The Chicago River is hard to miss, even at dusk.
Chris Pritchard/Photodisc/Getty Images

Humans have been able to harness electricity for only a relatively brief span of time. Prior to that, while people did have some small measures of warding off the darkness, it was still a very important facet of their lives. They were guided by the stars and directed by the moonlight. They timed their lives according to their natural circadian rhythms and were in tune with all the vast bodily and behavioral impacts that entailed. Nowadays, we can stay up all night and defy the dark -- but at what cost?

There's no real definitive, overarching definition for the phenomenon known as light pollution, but here's a general way to break it down into types:

While there are other names sometimes used to describe the above and similar lighting issues, the basic idea to keep in mind is that light pollution involves too much artificial light (often because of poorly chosen light bulbs, arrangements and fixtures) shining at the wrong time of "day" and typically resulting in grave consequences.