The Dark Side of Light Pollution: Animal Effects 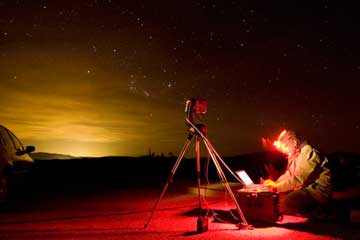 It's pretty obvious why astronomers are irritated over light pollution, but did you know animals are adversely affected as well?
AP Photo/John Locher

Astronomers just aren't fans of light pollution; it outshines distant incoming celestial light and interferes with their telescopes. But a wide array of animals suffers even more, their lives thrown horribly out of whack by the bright glow of light pollution.

Sleeping cycles, breeding cycles, migration cycles, feeding cycles -- animals follow all the proper patterns of life by taking cues from the sun, the moon, the seasons and other earthly phenomenon. An abundance of light confuses them and makes them act out of accordance with nature. It might not seem like a big deal if a flock of birds migrates a month early, but what if it's too cold when they get to their destination or the nesting conditions aren't right? Birds can also become confused when they fly over a bright city -- without the stars to guide them, they end up hopelessly lost and often fly until they're exhausted.

It's similar with baby sea turtles. When they hatch on a beach they're supposed to head down to the water. The moon serves to guide them and draw them on, but bright beach lights can easily distract them and the little turtles often head off in the wrong direction, frequently ending up the victims of passing cars.

Frogs and toads, bats and moths, fireflies and fish, plus many other animals can all suffer sometimes detrimental physiological and behavioral changes if they're fooled by artificial light. Activity levels, for example, often change. Some owls take advantage of the situation and hunt more, which increasingly drives their prey into hiding. Insects can be fatally drawn to certain wavelengths of light in droves, and it doesn't help that bats often follow to forage. Some animals are prone to breed more, others to breed less. Bioluminescent species are suddenly faced with tireless competitors: artificial lights.

The larger impacts of ecological disruptions such as these aren't always clear to researchers, but considering how delicate the planet's ecosystem is, long-term impacts are completely possible. Unfortunately for us, we're as much a part of the animal kingdom as any sparrow or sea turtle. So although we might not realize it, light pollution affects us just as surely as it does them.