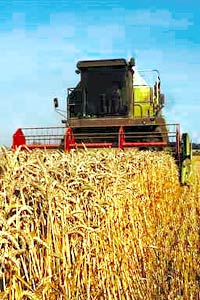 The phrase "organic farming" first appeared in Lord Northbourne's book "Look to the Land," published in 1940. But the truth is, organic farming is the oldest form of agriculture. Before the end of World War II, farming without the use of petroleum-based chemicals (synthetic fertilizers and pesticides) was the only option for farmers. Technologies developed during the war were found to be useful for agricultural production. For example, the chemical ammonium nitrate, which was used as munitions, became useful as fertilizer, and organophosphates used for nerve gas were later used as insecticide.

These days, farmers are switching to organic agriculture once again, but now with an ecologically based, systematic approach that includes long-term planning, detailed record keeping and major investment in equipment and supplies. Although it is still only a small industry, the number of organic farmers is growing by about 12 percent per year and now stands at more than 12,000 nationwide (source).

Organic Farming in the U.S. Today

The USDA's Economic Research Service reports that in 2003, the latest year for which data are available, farmers in 49 states used organic production methods and third-party organic certification services on 2.2 million acres out of a total of 828 million acres of farmland. Approximately two-thirds of the certified U.S. organic farmland was used for crops, and one-third was used as pasture.

Large farms, mostly located in the Midwest and West, produced processed tomatoes, organic wine grapes and other high-value crops on a commercial scale, whereas numerous small farms, concentrated in the Northeast, specialized in mixed vegetable production for direct marketing to consumers and restaurants.

While organic food can be found throughout the country, California was the leader in production of organic fruits and vegetables in 2003, with Washington and Oregon not far behind. Farmers and ranchers in 30 states raised a small number of certified organic cows, hogs and sheep. Wisconsin, California and New York were the top producers of organic dairy cows. The number of certified organic livestock increased more than fivefold from 1997 to 2003.

Beginning October 21, 2002, all farms and handling operations selling organic agricultural products worth more than $5,000 a year must be certified by a state or private agency accredited by the USDA. Organic farmers are, among other things, required to: