How long will the U.S. oil reserves last? 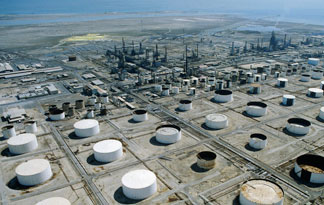 Will the U.S. run out of oil?
Anna Clopet/CORBIS

When we think of the term "oil reserves," we're actually talking about the United States Strategic Petroleum Reserve. The Strategic Petroleum Reserve is a government-owned stash of oil that's stored in four salt caverns in the Gulf Coast region. The reserve has a capacity of 727 million barrels (though there are plans to increase storage by expanding the existing caverns and building additional storage sites).

The Strategic Oil Reserve was established in 1973 out of concerns that political conflict with Arab countries and trade embargoes would compromise the United States' security position. Such circumstances include war or other unforeseen crises. A good example of such a release was during Hurricane Katrina, when the damage to the Gulf of Mexico region caused widespread and critical disruption of oil production and circulation. Recently, the largest release in the history of the reserve was announced as an economic measure.

In June 2011, President Obama announced that 30 million barrels would be released from the Strategic Oil Reserves, leaving about 697 million barrels in the reserve. This move was announced in hopes of neutralizing the spike in fuel prices that normally coincides with the increased travel of the summer season. Other countries that participate in the International Energy Agency agreed to match the amount, so that a total of 60 million barrels entered circulation. For all the discussion surrounding this decision, the oil released amounted to only about two-thirds of average daily 87-million-barrel global consumption. Critics of the decision said that it was a misuse of the reserves, which are intended as a national security measure to support the country in times of a true energy emergency.

A decision to release oil from the reserves generally includes a strategy or timetable for replenishing the depleted resources. For example, 20.8 million barrels were released in 2005 after Hurricane Katrina devastated the Gulf Coast and caused a critical disruption in supply. By 2008, however, that quantity had already been replaced and a new record high reserve of 707.21 million barrels was achieved. Then Hurricanes Gustav and Ike hit, prompting the release of another 5.4 million barrels. After that oil was replaced, the reserve was further supplemented, and reached its peak capacity for the first time in December of 2009.

So at its most literal interpretation, the question is: How long will 727 million barrels last?

Though the Strategic Petroleum Reserve has proven to be a reliable safeguard against a short-term crisis, it's hard to imagine a situation so catastrophic that the United States would simply run out of oil. At our current consumption rate of about 20 million barrels a day, the Strategic Petroleum Reserve would last only 36 days if we were faced with a situation where the oil had to be released all at once (however, only 4.4 million barrels a day can be withdrawn, extending our supply to 165 days). Or, in the event of a geopolitical conflict or crisis, the question can be answered this way: The Reserve says that at full capacity, the stash provides about 75 days of import protection.