How Scientists Measure the Ozone 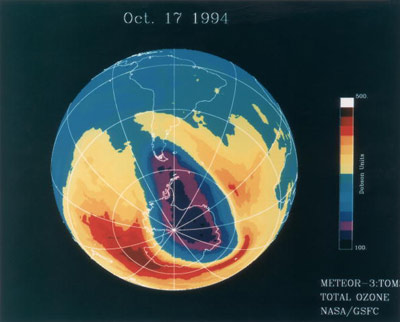 We can get measurements of the ozone layer from instruments on satellites in space. One of the TOMS instruments gave scientists data to create this image depicting ozone levels.
Space Frontiers/Stringer/Hulton Archive/Getty Images

Scientists are able to study the amount of ozone in a given vertical column of atmosphere by using various instruments. One such instrument is an ozonesonde ("sonde" comes from Old English, meaning messenger), which includes a balloon that carries the instrument up more than 21 miles (33.8 kilometers) high to the stratosphere [source: NOAA]. In the stratosphere, it sucks in and holds air to test the amount of ozone gas using an electrochemical concentration cell (ECC). The ECC uses potassium iodide, which reacts with ozone to create an electrical current, to measure the amount of ozone present [source: NOAA]. Although the balloon can burst when it reaches too high of an altitude, the device includes a parachute to reduce damage when it lands.

In addition to these ozonesondes, aircraft that can fly especially high can also reach the lower stratosphere to measure the ozone in the air. Also, UV detectors on the ground measure how much UV light has penetrated the ozone layer to reach the surface of the earth, which gives us clues as to how much ozone is in the atmosphere. Both ground stations and planes can use lasers to detect ozone, as well.

Other instruments scientists use include instruments on satellites, such as the TOMS (Total Ozone Mapping Spectrometer). The TOMS instrument determines the amount of ozone present in the ozone layer by reading backscattered UV light, which is the UV light the earth emits back into space [source: NASA]. Although the TOMS program closed in 2007 after the latest TOMS instrument started failing to transmit information, the program played an important role in revealing the state of the ozone for 30 years [source: Spector]. Meanwhile, different types of instruments have been commissioned to measure the ozone, such as the Ozone Monitoring Instrument (OMI) on the Aura satellite, which also measures backscattered UV light.

Because ozone gas is present among other atmospheric gases in various densities and in various altitudes, determining the "thickness" of the ozone depends on how you look at it. If you brought all the atmospheric ozone gas down to one layer, it would only be about a quarter of an inch thick (0.6 centimeters) [source: Fahey]. But, in reality, ozone gas spreads out in the stratosphere and works with oxygen to protect us. By this measure, the scope of the ozone layer is about 25 miles thick (40 kilometers) [source: Encyclopedia Britannica].

Using these techniques, scientists have been able to determine how much ozone gas is present in the stratosphere. This has led to some disquieting discoveries, which we'll talk about next.