The Danger and Prevention of Ozone Layer Depletion 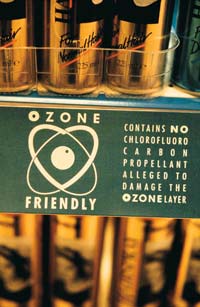 The Montreal Protocol was an effort to encourage industries to switch to "ozone friendly" products.
Stockbyte/Getty Images

The UV intensity on the surface of the earth fluctuates from day to day and depends on where you live. These days it's easy to check on the local UV index, which tells you how intense the UV radiation is in your area. In the U.S., the UV index is calculated from various factors, including ozone measurements and local cloud-coverage predictions [source: EPA]. Meteorologists measure UV radiation in terms of its energy in an area over time, such as milliwatts per square centimeter per second. They express this in weather reports in numbers and colors.

Even with the ozone layer, UVA and especially UVB light can penetrate it to cause these health problems for humans:

­Given that these risks exist even when the ozone layer absorbs about 98 percent of UV light, a future with an even thinner ozone layer is scary indeed. In the 1980s, this frightening prospect motivated the scientific community and policy makers of the world to address the issue of CFC production, which resulted in the 1987 Montreal Protocol. Policy makers from different industrialized countries signed this treaty as a pledge to reduce their CFC outputs. International Day for the Preservation of the Ozone Layer is celebrated each year on the anniversary date of the treaty, September 16th.

Efforts to find a replacement for CFCs have been somewhat successful. For instance, HCFCs (Hydrochlorofluorocarbons) can also potentially deplete ozone gas in the stratosphere, but not nearly to the extent of CFCs [source: UCS].

To learn much more about the ozone and other related subjects, explore the links below.