It Happens Every Spring: How a Hole Forms in the Ozone 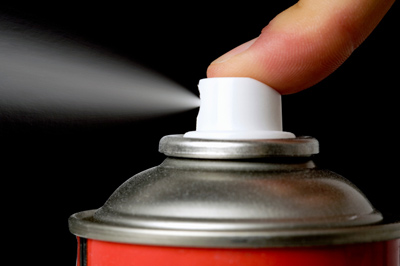 In the 1970s, scientists discovered that chemicals known as CFCs, which stands for chlorofluorocarbons, can reach the stratosphere and destroy ozone gas. This was a weighty discovery with worldwide implications because most of us rely on several products and appliances that, when manufactured or used, release CFCs into the atmosphere. Aerosol spray cans, Styrofoam, air conditioner units and refrigerators are a few items that make the list. The scientists began claiming that CFCs contribute to the formation of "holes" in the ozone.

How could this happen? And how could CFCs be partly responsible? Chemists Mario Molina and Sherwood Rowland were awarded the Nobel Prize in 1995 for their theories and research that explained how this might work. Scientists knew that chlorine and bromine are both substances that can destroy ozone. It turns out that some natural and man-made chemical compounds containing chlorine and bromine are able to rise up to the stratosphere where the conditions allow them to react with and destroy ozone. The earth's natural production of these substances accounts for 17 percent of the chlorine and 30 percent of the bromine in the stratosphere [source: Fahey].

Molina and Sherwood explained that CFCs, which are man-made, gradually rise up into the ozone layer, where ultraviolet light breaks the compounds apart, which releases chlorine [source: Nobel Foundation]. A chlorine atom can steal an oxygen atom from an ozone molecule, creating oxygen gas and chlorine monoxide (ClO), which effectively destroys the ozone molecule [source: Chemical Heritage]. But the chlorine atom isn't done yet; a chlorine atom can break from its oxygen atom and wreak havoc on as many as 10,000 more ozone molecules [source: UCS]. From their findings, the chemists projected that after years of unrestrained CFC production, the ozone would deplete significantly.

For several decades, scientists have been tracking the hole in the ozone layer that forms over the Antarctic every spring.
Getty Images

When scientists and popular media refer to a "hole" in the ozone, what they really mean is an area with low DU, or where the vertical column of ozone layer (which, as we found, spans about 25 vertical miles) includes little ozone gas compared to the other areas. In one sense, the ozone "hole" can be understood as a "thin" area of the layer because if we collected all the ozone in that vertical area, it would be thinner than other places over the earth. Specifically, scientists are worried that production of CFCs will lead to a "hole" over Antarctica.

Every year, the ozone levels over Antarctica sink drastically during the Southern Hemisphere's spring. Scientists believe this began happening in the late 1970s as a result of CFCs. The hole forms in the Antarctic because cold air becomes trapped there as a result of the polar vortex -- strong, circulating winds. The cold temperatures allow the formation of polar stratospheric clouds (PSCs), or ice clouds. These PSCs are conducive to the breakdown of chlorine-containing compounds, which are there because of our production of CFCs. This makes the area especially susceptible to ozone depletion. When sun hits PSCs in early spring, large amounts of chlorine monoxide form from the substances that contain chlorine. Fortunately, by early summer, ozone from other areas comes in to help fill this hole [source: Fahey]. But because of our CFC production, the hole returns each year. For more information on this phenomenon, read "Can we plug the hole in the ozone layer?"

Next, we'll take a closer look at ozone depletion and what it means for us on earth. Are there any efforts that could prevent it from getting worse?