How are solar cookers saving lives in Chad and Darfur? 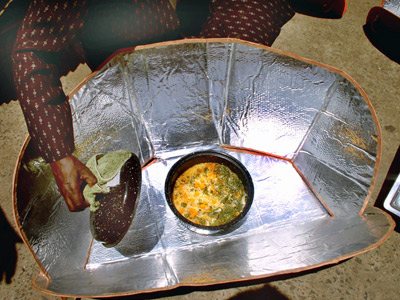 Solar cooking has benefits beyond the central, security-oriented goal of the program. It's also better for health. Now, since women only need to cook the morning meal with firewood (because there's not enough sun yet), they spend far less time hunched over smoky fires. They're inhaling less smoke to damage their lungs.

­They also have a­ whole new set of opportunities to earn money in the solar-cooking industry within the camp. Nonprofits have trained the women to manufacture the solar cookers and to become cooking trainers themselves, for which they're paid a wage. With this new market, women have also started creating their own solar cooking products, like carrying bags for the cookers and warming baskets that keep food that was cooked during high-sun hours warm until it's time to eat the evening meal.

Other entrepreneurial opportunities have sprung up as well. Suddenly, women aren't spending all of their time cooking, since solar cookers don't need to be attended at all. Women have started creating arts and crafts that aid organizations bring back to the West to sell for them. They also have more time to care for their families.

Accompanying this improvement in quality of life is an improvement in environmental friendliness. The air is less smoky around the camp, and trees are being cut down at a slower rate. Some estimates claim that by 2010, western Chad will have no trees left if consumption continues at the current pace [source: Andres]. Widespread solar cooking could postpone that significantly.

While the United Nations had little success in its attempt back in the 1950s to bring solar cooking to poor, firewood-scarce areas, this current program seems to be working. Each of the more than 4,600 families in Iridimi is cooking food with sunlight. And nearby Toulom camp, home to 22,000 refugees, is up next. As of July 2007, 500 women per month are learning to solar cook in Toulom.

For more information on solar cooking, the Darfur crisis and related topics, look over the links below.