The Benefits of Solar Cooking 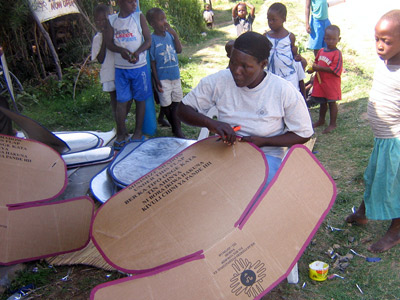 Solar cookers are inexpensive and simple to make: Most require only cardboard, foil and a pot.
Courtesy of Solar Cookers International

­Around the globe, hundreds of millions of people have limited access to cooking fuels [source: SCI]. In most cases, electricity and gas are out of the question; only charcoal and firewood are within reach, and even charcoal can be too expensive. So we're left with wood. The problem is that in many poor, rural areas in places like Africa and India, trees are scarce. It takes a lot of wood to cook meals for an entire family every day, and what few wood sources there are continue to dwindle. Families have to walk for hours to collect cooking wood, and they end up spending what little money they have on their fuel, leaving less money to buy food.

The result is not only hunger, but also disease.

When 1 billion people are without access to clean water, the ability to easily pasteurize (heat to the point at which microbes die) is crucial [source: SCI]. Two million people die every year from bacterial illnesses that could have been prevented by pasteurizing drinking water [source: SCI]. Heating meat, as well as vegetables grown with contaminated water, is also important for health. All of these nutritional necessities can contain harmful bacteria, worms and viruses that cause potentially deadly diseases like hepatitis A, giardia and E. coli sickness.

It doesn't take a whole lot of heat to pasteurize. Water is pasteurized at just 150 degrees F (65 degrees C), and food is pasteurized at 180 degrees F (82 degrees C) [source: SCI]. Solar cookers, which can cost as little as $10 a unit for a simple design, easily reach the upper temperatures of pasteurization, and they cook a meal in a few hours, depending on the cooker and the type of food. Best of all, people don't have to walk for miles to get the fuel they need. They simply go outside and use the sun -- for free. Using a solar cooker for a single year can eliminate the need for 1 ton (0.9 metric tons) of firewood [source: Justus].

­Another problem that can be solved by solar cooking has to do with the simple act of burning wood. Fires release pollution into the air. This smoke, filled with particulates, is bad for the environment, but it's even worse for the people who are breathing that air. When people use open fires to cook indoors, they end up inhaling microparticles that can cause all sorts of health problems, including both lung and heart disease. One estimate puts the number of people who die from this type of air pollution at 1.5 million per year [source: Madrigal]. A solar cooker eliminates the need for an open flame, meaning cleaner air.

While solar cookers are a great solution for many developing countries, there are a few drawbacks. The very trait that makes solar cookers so beneficial -- sunlight as fuel -- also makes it problematic. Solar cooking on a broad scale is really only viable for countries that have a dry, sunny climate for at least half the year. Areas of India, Brazil, Kenya and Ethiopia are some of the ideal locations for this cooking method [source: SCI].

Perhaps the bigger problem is that even in places like India, the sun isn't always shining. Solar cookers won't work at all in nighttime or on cloudy days. That means firewood is still a necessity for the sun's off hours. Still, cooking most meals with light instead of wood makes a big dent in the problems facing the fuel-deprived masses.

For more information on solar cooking and related topics, look over the links below.

You can buy a wide variety of solar cookers online at lots of "green" consumer sites. One of these fancy units can run you anywhere from $50 to $300 -- possibly worth the price in energy savings, but more likely worth the eco-conscious self-satisfaction. Or, for much, much less money, you can make your own. You'll find plans all over the Internet, including here: