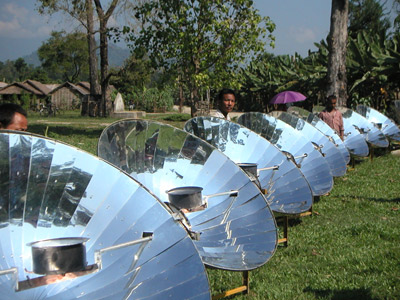 Parabolic cookers can use the heat of the sun to reach temperatures of up to 400 degrees Fahrenheit (200 degrees Celsius).
Courtesy of Stichting Vajra

­In the mid-1700s, a European naturalist named Horace de Saussure built a small device intended to harness the energy of sunlight. Scientists at the time were doing a lot of work with converting sunlight to heat, but they were mostly using mirrors to concentrate the light into a single burning point. Saussure was focused on the heat-trapping capacity of glass.

What Saussure created was the earliest known solar cooker, most comparable to what we now call a solar box cooker. He nested five glass boxes one inside the other, and rested them on a black slab of wood. After several hours exposed to sunlight, the temperature inside the box reached just shy of 190 degrees Fahrenheit (88 degrees Celsius). He used the box to bake fruit.

What began in the 18th century as a science experiment, an attempt to find out why and how glass traps sunlight to create heat, is now a helpful tool in alleviating hunger and disease in the world's poorest count­ries. (It's also a very cool, environmentally friendly replacement for the typical backyard barbecue.) The modern concept of solar cooking first came on the scene in the 1950s but failed to gain popularity, perhaps due to faulty United Nations marketing techniques [source: Radabaugh]. With the right device, the thermal (heat) energy in the sun's rays can be harnessed to achieve temperatures so hot they can fry food.

A solar cooker can do almost anything a stove or an oven can do, only it uses a natural nonpolluting, free, abundant energy source. In this article, we'll find out how sunlight becomes heat, check out the different types of cookers available and how they work, see what makes solar cooking a potential lifesaver in many parts of the world and examine some of its shortcomings.

Let's begin at the core of the process: How does sunlight, also known as electromagnetic radiation, become heat? ­