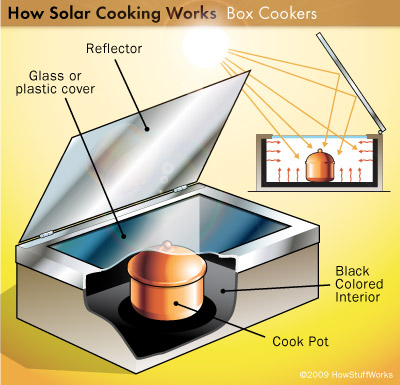 ­Using stoves and ovens, we can cook foods like meat, vegetables, beans, rice, bread and fruit in just about any way. We can bake, stew, steam, fry and braise. Using a solar cooker, we can do the same things, but by using sunlight instead of gas or electricity.

Sunlight isn't hot in and of itself. It's just radiation, or light waves -- basically energy generated by fluctuating electric and magnetic fields. It feels warm on your skin, but that's because of what happens when those light waves hit the molecules in your skin. This interaction is similar to the concept that makes one form of solar cooker, the box cooker, generate high temperatures from sunlight.

At its simplest, the sunlight-to-heat conversion occurs when photons (particles of light) moving around within light waves interact with molecules moving around in a substance. The electromagnetic rays emitted by the sun have a lot of energy in them. When they strike matter, whether solid or liquid, all of this energy causes the molecules in that matter to vibrate. They get excited and start jumping around. This activity generates heat. Solar cookers use a couple of different methods to harness this heat.

The box cooker is a simple type of solar cooker. At maybe 3 to 5 feet (1 to 1.5 meters) across, it's essentially a sun-powered oven -- an enclosed box that heats up and seals in that heat. At its most basic, the box cooker consists of an open-topped box that's black on the inside, and a piece of glass or transparent plastic that sits on top. It often also has several reflectors (flat, metallic or mirrored surfaces) positioned outside the box to collect and direct additional sunlight onto the glass.

­To cook, you leave this box in the sun with a pot of food inside, the pot sitting on top of the black bottom of the box. When sunlight enters the box through the glass top, the light waves strike the bottom, making it scorching hot. Dark colors are better at absorbing heat, that's why the inside is black. The molecules that make up the box get excited and generate more heat. The box traps the heat, and the oven gets hotter and hotter. The effect is the same as what goes on in a standard oven: The food cooks.

A parabolic cooker can get even hotter, up to 400 degrees F (204 degrees C), which is hot enough to fry food or bake bread. This slightly­ more complicated design uses curved, reflective surfaces to focus lots of sunlight into a small area. It works a lot like a stove, and it's big, sometimes up to several feet across.

A pot of food sits on an arm that holds it in the center of the curved reflectors, suspended slightly above the bottom point of the oven, where all the light is concentrated. This small point gets so hot -- and the molecules vibrate so much -- that the heat waves move upward in a steady stream to strike the bottom of the pot.

Both parabolic and box cookers are quite large, making them difficult to carry around. And box cookers are heavy because of the glass. A panel cooker, which uses parabolic reflectors positioned above a box-type oven, tends to be smaller and lighter. The cooking pot goes in a plastic bag while it cooks, which acts as a heat trap (like the transparent top on a box cooker). People sometimes use these types of cookers in ­camping.

Camping is something of a side job for solar cookers, though. The more central applications have to do poverty, hunger and disease.

How can cooking with sunlight help?