How Coffee Printers Will Work

Browse the article How Coffee Printers Will Work 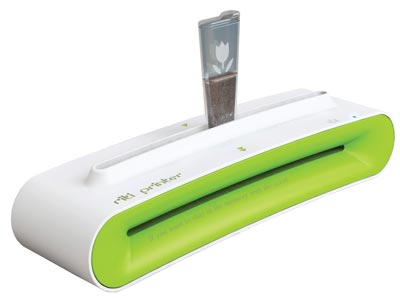 Imagine finishing off a nice cup of morning coffee and then, instead of throwing the grounds into the trash, pouring them into a cartridge where they become printer ink. This ingenious idea is the premise of an exciting new design for a next-generation eco-friendly printer -- the RITI coffee printer -- that we'll examine in this article.

The coffee printer is reflective of a growing movement for more eco-friendly electronic devices, ones that eschew toxic compounds and use more recyclable components. Some of these gadget designs use bioplastics, biodegradable plastics. At the 2008 Greener Gadgets Conference, computer giant HP presented a printer made out of a corn-based bioplastic. The coffee printer was part of 2009's conference.

Conventional inkjet printers are very wasteful. On average, if you heed your printer's warning messages and buy new cartridges when instructed, you'll be tossing away up to 58 percent of the cartridge's ink [source: Hayworth]. A printer's "cleaning" program also causes it to go through costly ink. Adding to the problem, most people don't recycle their cartridges, and so every year, around 270 million print cartridges, made up of plastic, metal, rubber and other materials, end up in landfills [source: UConn Recycling].

Most printer ink is petroleum-based, which means that like with our transportation sector and plastic production, we use tremendous amounts of oil to make printer ink and toner -- around 50,000 tons (45,359 metric tons) of black gold per year [source: Billera]. During manufacturing, petroleum-based inks also produce dangerous chemicals called volatile organic compounds (VOCs). These pollutants can get into the air and groundwater and may lead to a variety of acute or chronic health problems.

Now that we've established some of the problems with conventional inks, let's take a look at some of the benefits of the coffee printer's design.

To cut down on the amount of electricity it uses, the coffee printer will require a little elbow grease. The user will have to load the ink case with ink (coffee grounds) and move it back and forth to accomplish the printing.
Inhabitat

The coffee printer is envisioned as being as environmentally friendly as possible. Consequently, the current design appears to use little electricity, though presumably it would have to use some, at the very least for the LED indicator lights on the outside of the device and to push the paper through the printer. Printers also require heat to bond the image to the paper. But the coffee printer could use a standard USB connection to siphon off energy from the computer and, of course, to transmit printing instructions from the computer to the printer. However, most inkjet printers (and this design appears to resemble one) require a standard power cable.

Perhaps the most exciting aspect of this printer design is that it uses a basic household product that traditionally goes to waste. Load in some coffee grounds and water, and you have homemade ink. And besides coffee grounds, the printer can use tea dregs. The grounds or dregs and water are loaded into a reusable "ink case" rather than a wasteful ink cartridge.

So, how do you turn coffee or tea dregs and water into print on a page? This alluring idea is still in the concept stage, so there aren't any patents for us to peruse. But, the general idea can be seen in the instructions from the original sketches, which basically call for moving the ink case back and forth, thereby dripping coffee- or tea-colored water onto the paper and forming text or images.

Some users may appreciate this little bit of manual labor, as it means they will be more involved in the printing process, turning it into something like a craft. After you're done, you can still find a sustainable manner in which to dispose of your coffee grounds -- many people compost them -- but before that, you can, quite literally, squeeze out every last drop of useful material.

Some ink cartridges are quite expensive (particularly for high-volume color or photo printing), so the coffee printer, by using materials that you'd normally throw away, may be a cheaper alternative. Plus there are no trips to the office-supply store, no trying to find the correct kind of cartridge, and no worrying about recycling old cartridges. Instead of misleading warning messages on your computer -- which may pop up long before your ink is actually going to run out -- you can clearly see when your ink supply is low.

Printing on My Morning Joe?

Among some coffee drinkers, the idea of latte art is taking off; specially modified printers are used to "print" images or designs on the top, foamy layer of coffee drinks. 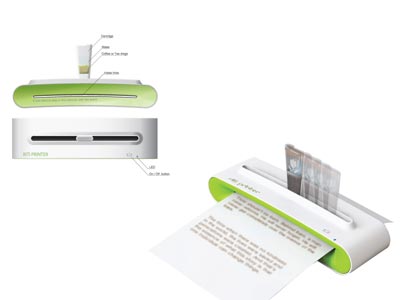 After you've finished printing, you can still find a sustainable manner in which to dispose of your coffee grounds by composting them.
Inhabitat

In considering the coffee printer, it's important to note that this is a speculative design, but that does not mean that there isn't room for criticism, even in the concept stage. Chief among the design's defects is that the ink color and quality are limited by the materials on hand, and who knows if the ink will stay on the page for as long as other inks? The coffee scent may remain, though some users will appreciate that familiar, earthy aroma.

Cost may in fact be an issue, as one batch of coffee grounds may not produce much ink. That is, if you can even get the ink loaded: Loading the ink is a precarious process, involving manual labor, time and possible spills.

Is this sort of a machine even viable? The current design depicts the printing process as something like "drawing" with a coffee-filled cartridge. Obviously, that is not a way to produce crisp text and clear images, nor would it be pleasant to move the cartridge manually to draw on 10 or 20 pages. But even if a more conventional printer design were adapted to accept this kind of ink, your ink supply is still tied to your coffee or tea consumption. You also won't be able to print in other colors, including black, without incorporating dyes.

There are already many other alternative, environmentally friendly types of ink out there, including vegetable-oil inks and metal-free inks. Inks derived from vegetable oil are often considered eco-friendly and sustainable because they don't produce VOCs and come from several different types of crops.

Soy ink is a widely used alternative to traditional inks, many of which are derived from petroleum. Developed by the Newspaper Association of American in response to the oil crisis of the late 1970s, soy ink hit the market in 1987 and now occupies 22.5 percent of the U.S. printing market [source: TreeHugger]. It's considered cost competitive and is used by up to 90 percent of American newspapers, particularly for color printing [source: Schmidt].

There are also various soy-based options for home and office printers. In fact, soy ink has become so successful that the National Soy Ink Information Center, which disseminated information about the benefits of this greener ink, closed shop [source: NASIC]. However, be careful: Some inks that claim to be soy ink actually only have a small percentage of the stuff in them; the rest is usually petroleum-based ink.

For more information about printers, alternative inks and similar topics, visit the links on the next page.