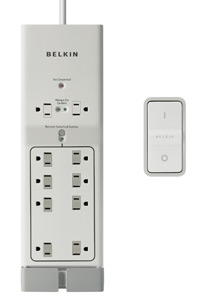 Today's smart power strips can do more than just turn outlets on or off. The Isolé IDP-3050 is one such strip. It's a power strip with surge protector features, with one nifty upgrade: It has a motion detector, too. When there's a person nearby, all outlets are active. When the room is unoccupied for a set length of time -- anywhere from 30 seconds to 30 minutes -- the IDP-3050 stops power to six of its eight outlets. The amount of time a room needs to be empty before the power goes out is up to you.

The motion detector uses a passive infrared system. Sensors detect the infrared energy, or heat, all humans radiate. If you remove that infrared energy by leaving the room, the motion sensor, which has a maximum range of about 300 feet (91 meters), sends the signal to start the countdown to power shutoff. If you walk back into the room, the sensors detect your heat and stop the countdown.

Like the Isolé, Belkin's Conserve surge protector has eight outlets, two of which provide constant power. You control the other six outlets with a remote control, which is designed to look like a light switch and slides in and out of a mount on your wall. This is a major benefit for people who have outlets in hard-to-reach places -- you don't have to flip multiple switches or cram your arm into a tight space behind your entertainment center to shut off the strip. The remotes communicate using radio waves, which means they can work through walls. And since each remote can work on several frequencies, you can decide whether to control multiple Conserve strips with a single remote or with a different one for each strip.

Some smart power strips also come in much smaller packages than the Conserve or the Isolé. The Mini Power Minder is one example. It's a two-outlet smart strip designed for smaller spaces. It also uses a USB cable to help monitor your computer usage. You connect one end of a USB cable to the Minder and the other to your computer. When you shut down your computer for the day, the Minder senses the change in power levels and cuts electrical current to the secondary outlet.

All of these smart strips have some limitations that make them most suitable for specific electronics setups. Keep reading to see how you can integrate power-saving devices into your home and combat challenges inherent to using them.