How Does fMRI Scan the Brain? 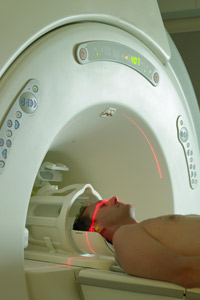 fMRI is based on the idea that blood carrying oxygen from the lungs behaves differently in a magnetic field than blood that has already released its oxygen to the cells. In other words, oxygen-rich blood and oxygen-poor blood have a different magnetic resonance. Scientists know that more active areas of the brain receive more oxygenated blood. The fMRI picks up this increased blood flow to pinpoint greater activity. The measurement of blood flow, blood volume and oxygen use is called the blood-oxygen-level-dependent (BOLD) signal.

The MRI machine is an expensive piece of equipment (costing between $500,000 and $2 million) that visualizes the brain using a combination of radio waves and an incredibly powerful magnetic field [source: Frost & Sullivan Research]. The typical research MRI scanner has a strength of three teslas -- a force about 50,000 times stronger than the Earth's magnetic field [source: University of Oxford].

When you lie inside the cylindrical MRI machine, it aims radio waves at protons -- electrically charged particles in the nuclei of hydrogen atoms -- in the area of your body being studied. As the magnetic field hits the protons, they line up. Then the machine releases a short burst of radio waves, which knocks the protons out of alignment. After the radio-wave burst has ended, the protons fall back in line, and as they do, they release signals that the MRI picks up. The protons in areas of oxygenated blood produce the strongest signals.

A computer processes these signals into a three-dimensional image of the brain that doctors can examine from many different angles. Brain activity is mapped in squares called voxels. Each voxel represents thousands of nerve cells (neurons). Color is added to the image to create a map of the most active areas in the brain.