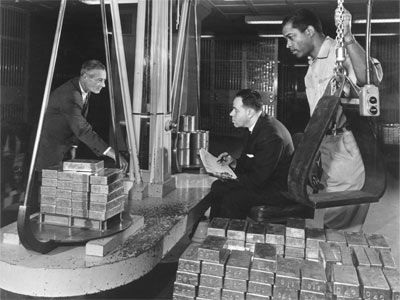 One big use we didn't talk about last section was gold's role as a form of currency. You can read much more in How Currency Works, but it's worth mentioning here because gold and money are practically synonymous. Gold coins have been around for centuries, probably since King Croesus, the ruler of ancient Lydia, issued pure gold coins on a large scale in 640 B.C. As we mentioned, the Greeks and Romans also minted gold coins, like the widespread Roman aureus coins. It would be many years before another coin would be so popular. That coin was the ducat, introduced in Venice in 1284. Great Britain issued its first major gold coin, the florin, the same year. Ephraim Brasher, a goldsmith, struck the first U.S. gold coin in 1784.

­In addition to making coins out of gold, governments also hold gold in reserve in case they need to make payments for intern­ational debts. In fact, the world's central banks hold about 20 percent of the aboveground supply of gold [source: World Gold Council]. The U.S. government stores its reserves in two locations -- the Federal Reserve Bank in New York City and the United States Bullion Depository at Fort Knox, Ky. Walk into either facility, and you would see bricklike bars, known as ingots, stacked like firewood. Each bar is 7 inches by 3.625 inches by 1.75 inches and weighs 400 ounces, or 27.5 pounds. In metrics, that comes out to a bar roughly 18 centimeters by 9 centimeters by 4 centimeters weighing a little more than 11 kilograms. Fort Knox currently holds 147.3 million ounces of gold (4.2 million kilograms). With a book value of $42.22 per ounce, that makes the Fort Knox holding worth $6.2 billion [source: United States Mint]!

­The demise of the gold standard has led to the rebalancing of those reserve portfolios. You can read more about the gold standard in this HowStuffWorks article on the New Deal, but here are a few basics. Countries on the gold standard will exchange paper currency for gold and will buy and sell gold at a fixed price. In 1900, with the passage of the Gold Standard Act, the United States formally adopted the gold standard, only to abandon it in 1971.