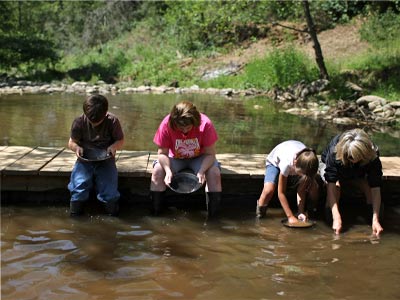 With gold trading near record highs in 2008, people flocked to California's gold country in search of it. Companies offering gold panning tours were inundated with reservations.
Justin Sullivan/­Getty Images

More than 90 percent of the world's gold has been produced following the rushes of the mid- to late 1800s [source: World Gold Council]. The entire process of gold mining can be broken down roughly into four steps: prospecting, mining, extracting and refining.

Early discoveries of gold relied on the blind luck of someone spotting a yellow glint in a stream or in a crack between rocks. But the search today is more systematic and precise. First, geologists know more about how gold forms. They know, for example, that the metal is present in almost all rocks and soil, but the grains are so small that they're invisible. Only in a few areas is the gold concentrated enough to be mined profitably. Scientists, known as prospectors or explorationists, search for these deposits. This is known as prospecting. Sometimes, these deposits contain pure gold. In most deposits, however, gold is combined with silver or another metal. After finding indications of gold, scientists drill to obtain samples from below the surface, which they analyze for their gold content. If there's enough gold in the deposit, the mining company may set up a large-scale mining operation.

How gold is mined depends on the deposits. Lode deposits are concentrations of gold found in solid rock. If the gold-bearing rock is located at the earth's surface, the mining company will use open-pit techniques. First, miners drill a pattern of holes, which they then fill with explosives. Next, they detonate the explosives to break up the ground so it can be loaded into haul trucks.

If the lode deposit is located beneath the Earth's surface, underground mining is necessary. In this case, miners drill a shaft, or an adit, into the ground to access the lode. Then they dig long vertical tunnels, known as stopes, that extend from the top of the ore block to the bottom. After they drill and load explosives into the ore block, the miners detonate the explosives, causing broken ore to fall to the bottom of the stope. There, ore is loaded into trucks and taken to the surface.

Placer deposits -- accumulations of loose gold in the sediments of a streambed or a beach -- are mined differently. Miners scoop up sand, gravel and rock, and mix it with generous amounts of water. The gold, because of its greater density, sinks faster than the other materials and collects at the bottom. Many miners use a metal or plastic pan to separate the gold from sediments, a process known as panning.