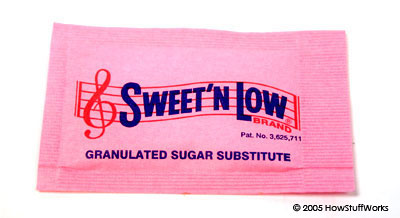 Fear of artificial sweeteners rose shortly after the first sweeteners were introduced in the food market. When public health trends, such as an increase in certain types of cancer, show up, scientists look to newly-introduced substances. Saccharin and cyclamate have been around the longest, and both were eventually linked to cancer in laboratory mice and rats. Studies associating saccharin with bladder cancer may have spurred the long-term perception that all artificial sweeteners could cause cancer. The press is often blamed for reporting on possible carcinogenic effects without having the scientific evidence to back it up.

In addition to cancer, thousands of Web sites and forums have information on other dangers and side effects associated with aspartame, sucralose, and other artificial sweeteners. Multiple sclerosis, Alzheimer's disease, brain tumors, nervous disorders and other health problems have been blamed on them. Aspartame is getting most of the criticism, but sucralose is also under scrutiny.

The FDA stands behind the products that it has approved. A question and answer page on the FDA Web site includes the following:

All consumer complaints related to the sweetener [aspartame] have been investigated as thoroughly as possible by federal authorities for more than five years, in part under FDA's Adverse Reaction Monitoring System. In addition, scientific studies conducted during aspartame's pre-approval phase failed to show that it causes any adverse reactions in adults or children. Individuals who have concerns about possible adverse reactions to aspartame or other substances should contact their physicians [ref].

If diet soft drinks and sugar-free foods are readily available, why are so many people still overweight? A recent study by researchers at Purdue University found that drinking diet soft drinks might actually be part of the problem. Professors in the Department of Psychological Sciences found that artificial sweeteners may interfere with the body's natural ability to "count" calories. Our bodies' ability to match how many calories we need with how many calories we take in is partially based on how sweet a food is. The sweeter and denser it is, the higher it is in calories. Our bodies use this as a gauge to tell us when to stop eating.

Artificial sweeteners, however, throw a wrench into this process. By eating and drinking foods and beverages that use artificial sweeteners (and therefore have lower calories), we may be retraining our bodies to no longer associate sweetness with higher calories. That means that when we eat or drink foods sweetened with real sugar, our bodies miscalculate the true calories associated with that food. As a result, we consume more calories.

The National Soft Drink Association argued that the study was flawed and that many other studies showed that the use of low-calorie sweeteners does promote weight loss.

In the next section, we'll discuss how artificial sweeteners make it in the food chain.