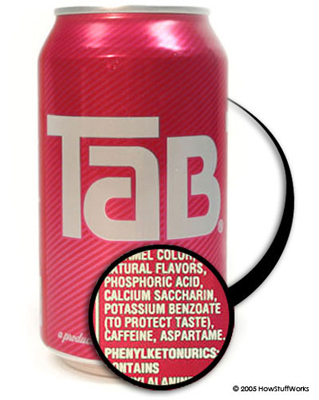 Tab is one of the few products on the market to contain saccharin.

Saccharin (the Latin word for sugar) is a synthetic chemical that was discovered in 1879 and was the first artificial sweetener. Two chemists at Johns Hopkins University discovered saccharine when a vessel boiled over in the lab where they were creating new chemical dyes from coal tar derivatives. One of the chemists forgot to wash his hands before eating and noticed that his fingers tasted sweet. Saccharin is 300 times sweeter than sugar and not metabolized by the body, so it has no calories.

There are very few products that contain saccharin these days. Fountain Diet Coke® and Pepsi® use a blend of saccharin and aspartame, as does Tab®. It's also still available as Sweet 'N Low®, a tabletop sweetener in the familiar pink packet.

Saccharin has had a very controversial past. The FDA tried to ban it in 1977 because some animal studies showed that it caused cancer (mainly bladder cancer, but also uterine, ovarian, skin, and others). Saccharin stayed on the market because of pressure from the diet food industry (and the dieters themselves). However, it carried a warning label that stated it had been shown to cause cancer in laboratory animals until the late 1990s. The Calorie Control Council argued that people don't develop bladder cancer in the same way that rats do, so the warning label should be removed.

In 2000, the National Cancer Institute (NCI) stated that people who used saccharin had no greater risk of bladder cancer than the population as a whole. People who were heavy saccharin users (six or more servings of saccharin or two or more 8-ounce servings of diet drink daily) had "some evidence of an increased risk of bladder cancer, particularly for those who heavily ingested the sweetener as a tabletop sweetener or through diet sodas." Because of this study and other research with laboratory animals, it was decided that saccharin was not a major risk factor for bladder cancer in humans. Saccharin was removed from the NIH's list of carcinogens and Congress agreed to remove the warning requirement from products containing it.

Next, we'll learn about aspartame, another controversial sweetener.

was accidentally discovered in 1937 by a graduate student at the University of Illinois. It is 30 to 50 times sweeter than sugar. The FDA banned cyclamate in 1970 after reports that it caused cancer in animals, but there is currently a petition for re-approval.

is still used in over 50 countries, including Canada (where it is the sweetener in Sweet n' Low). Ironically, saccharin is banned in Canada except for use by diabetics.