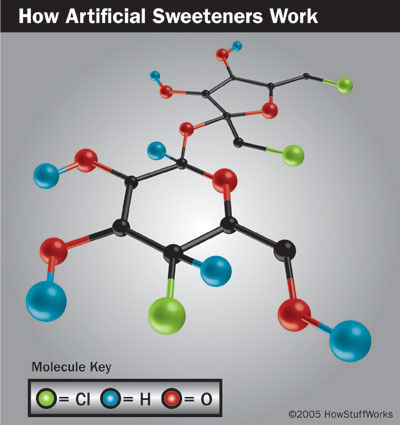 To create sucralose, three of the hydrogen (H) and oxygen (O) groups in a sugar molecule are replaced with three chlorine (Cl) atoms. At that point it is no longer sugar -- it is an artificial sweetener that is 600 times sweeter than sugar.

Sucralose isn't metabolized by the body, so it has virtually no calories. The chlorine that prevents it from being absorbed by the body also gives it the ability to withstand enough heat to be used in baking. (Other sweeteners lose their sweetness if you try to bake with them.) It was approved by the FDA for use in foods and beverages in 1998.

Sucralose, marketed as Splenda®, is the fastest growing artificial sweetener on the market. It can be found in everything from frozen deserts, to sodas, to cookies, gum, and candies. Sucralose is sold in bulk for baking and is available in a small yellow packet for sweetening your coffee or tea.

Sucralose isn't as controversial as aspartame. However, the Food and Drug Administration's 1998 report that gave approval for sucralose also stated that it is "weakly mutagenic in a mouse lymphoma mutation assay." This means it caused minor genetic damages in mouse cells. In addition, it stated that one of the substances sucralose breaks down into when digested is also "weakly mutagenic in the Ames test." The Ames test is the standard method used to detect possible carcinogens [ref].

The other controversy is over the way Sucralose is marketed as Splenda. Because of their tagline, "Splenda is made from sugar, so it tastes like sugar," many people believe that Splenda is a natural sweetener and therefore healthier, which isn't the case. Because there have been no long-term studies, no one really knows if sucralose is healthier then other artificial sweeteners.