Browse the article How Bread Works 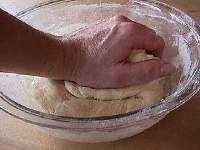 ­You probably eat bread every day. You may even know how to make your own bread. But have you ever thought about bread as a technology?

­Why do we have bread? That's a great place to start. We could jus­t as easily munch on dry wheat­ kernels instead. Or we could grind the wheat into flou­r, mix the flour with water and eat it as­ a wet mush. Or we could pour the mush out on a table and dry the mush into thin brittle sheets. But we don't do that, mainly because bread tastes a lot better, and it also works a lot better for sandwiches. Bread is moist (not wet like mush or dry like dried mush), soft (unlike wheat kernels), spongy and delicious. Bread is a bio-chemical technology for turning wheat flour into something tasty!

In this article, we will examine the technology of bread in detail.­ ­

If you pick up a slice of bread and examine it closely, you can see that it is full of air holes. This makes it spongy and soft. You will also see that bread is moist. If you let a slice of bread sit out on the counter for a day, you will realize just how moist fresh bread is!

You can perform a few experiments to better understand how bread works.

When you come back to your experiment, you'll notice that yeast cells do a really good job of creating carbon dioxide. You will see that the bag has partially filled with the gas, and that the liquid is full of carbon dioxide bubbles that the yeast has produced. A yeast cell can process approximately its own weight of glucose (sugar) per hour, and from the glucose (C6H12O6), yeast produces carbon dioxide (CO2) and ethanol (C2H5OH) (two molecules of each). Although yeast cells are small, there are billions of them available from the packet of yeast. You should be able to see a noticeable amount of puffiness in your bag after two hours. You may want to go to bed and let the bag sit overnight -- it will get quite puffy if you let it.

Now, let's see what happens if we change things around a bit.

What you will notice is that this mixture produces carbon dioxide, but somewhat more slowly. (If you run Experiments 1 and 2 simultaneously, you will be able to see the different rates more easily.). Where did the sugar for the yeast to eat come from in Experiment 2? We didn't put any sugar at all in this bag, right? It turns out that, in the mixture of flour and yeast, there are enzymes that turn the starch in the flour into maltose, another sugar. The yeast uses this sugar in the same way it uses the glucose in white sugar. It takes time for the enzymes to convert starch to maltose, and that's what causes the delay. However, the yeast is able to produce some carbon dioxide, and that's how you know the enzymes are working. In a loaf of bread, it is this flour-to-maltose reaction that actually drives the expansion of the bread for the most part -- the small amount of sugar you mix into the bread dough is used up by the yeast fairly quickly.

From the previous two experiments, you can see that yeast cells produce plenty of carbon dioxide. The reason why bread bakes up so airy is because the bread dough captures and holds the carbon dioxide that the yeast produces. It does this because flour contains a protein called gluten. To see gluten in action, try this experiment:

That elasticity is caused by the gluten in the flour. Gluten is a protein that forms thread-like chains. By stirring (or more commonly, kneading) the dough, the gluten develops into long, interlaced chains. Kneading is better for developing these chains because kneading is gentle -- it does not cut the chains up. When you knead bread dough, you are creating gluten chains. If you were to skip the kneading part, your bread would not rise very well -- all the carbon dioxide in the yeast would bubble up to the top and escape, rather than being captured inside the elastic dough. 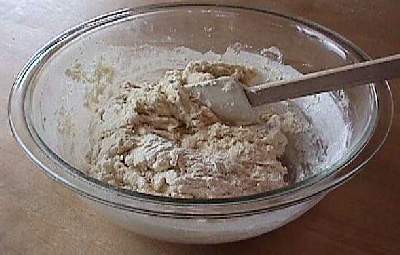 By now, you understand a whole lot more about the technology of bread!

So, let's bake some bread and try it out! To make one loaf, you'll need:

Now, you need to knead the dough for about 10 minutes. Start by washing your hands.

Now, you need to let the dough rise in a warm place for between 60 and 90 minutes. The easiest way to create a warmish place is to turn your oven on to its lowest setting possible (around 150 F/ 65.5 C), let it heat up to that temperature, then turn the oven off and open the door of the oven wide for about 30 seconds to dissipate some of the heat. Rub the 1 tablespoon of vegetable oil onto the top of the ball of dough to prevent drying, and then stick your bowl of dough inside the oven and close the door. Traditionally, you cover the bowl with a towel, also to keep the dough from drying out. Look in periodically.

After about 60 to 75 minutes, your dough ball will have nearly doubled in size. The gluten and the carbon dioxide that the yeast produced worked!

When your dough has again doubled in size, turn the oven on to 350 degrees F (176 C), and cook the bread for about 45 minutes. You will know it is done when the loaf has a nice golden-brown color and when you tap on the top crust, the tap sounds hollow.

Take your loaf of bread out of the oven -- don't forget to turn off the oven! Let the bread cool for a minute so you can get it out of the pan. Then cut off a slice and enjoy the miracle of fresh-baked deliciousness! You are tasting the great biological and chemical masterpiece called bread!

Here's a set of questions from readers.

For more information on bread and related topics, check out the links on the next page.