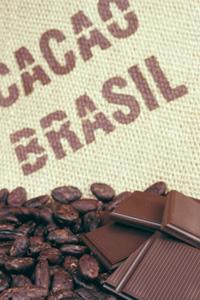 Come over to the dark (chocolate) side.
Hemera/Thinkstock

Here's some bad news for you if you're a chocoholic who isn't a fan of dark chocolate. The highest concentrations of flavonoids are found in chocolate with the highest amounts of cacao -- the solid part of the cocoa bean that gives chocolate its characteristic color and flavor. This means either very dark chocolate or unsweetened cocoa powder.

When you buy high-quality dark chocolate, its cacao content is listed on the wrapper as a percentage, which typically ranges between 35 and 100 percent. A 100-percent-cacao chocolate bar is simply processed cocoa beans, no added fat or sugar. Fans of dark chocolate rave over its deep, complex flavor. But if milk chocolate, white chocolate or some kind of filled or flavored chocolate is your love, there just aren't enough flavonoids in them to reap the potential health benefits. White chocolate doesn't contain any cocoa solids at all, in fact. Milk and white chocolate are higher in calories and sugar, too. A 1.5-ounce (43-gram) serving of milk chocolate may contain 230 calories and 25 grams of sugar, while the same sized-serving of 60 percent cacao dark chocolate has 180 calories and 15 grams of sugar. Finally, some studies have shown that dairy interferes with the body's absorption of flavanols.

If you want the greatest benefit, it may not be enough to just eat very dark chocolate. The amount of flavanols can vary widely depending on the cocoa bean, and the high temperatures that some chocolate manufacturers use during processing may also remove some or all of the flavanols. It's not common practice to list the amount of flavanols on the wrapper, but chocolate companies are increasingly choosing to process chocolate differently so as to preserve the flavanols. Some also sell bars made from raw cacao.

We just have a few more caveats before we delve into chocolate's -- dark chocolate's, that is -- potential health benefits. Many of the flavanol studies that you've seen cited in the media were funded by Mars, Incorporated -- the company behind Mars bars, M&Ms, Milky Way and Dove chocolates. Obviously, the company has an interest in being able to promote chocolate as healthy. In addition, Mars supplied scientists with a special blend of flavanol-rich cocoa -- something not found on the consumer market.

Still with us? Learn about the focus of chocolate health studies next.