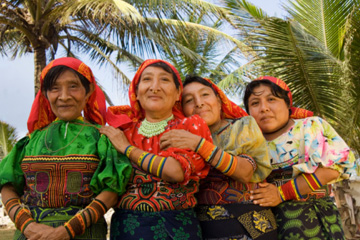 These Kuna ladies have good reason to be smiling -- they may be healthier because of chocolate.
Connie Coleman/Photographer's Choice/Getty Images

Now you can see why the answer to our question is a bit more complex than it seems. Even with all of the disclaimers, though, research into the health benefits of chocolate is promising. Most studies focus on its potential to fight off diseases that many doctors refer to as "the big four": diabetes, cancer, strokes and heart disease. In 2007, a Harvard researcher named Norman Hollenberg and his colleagues published a study in the International Journal of Medical Studies about a group of indigenous people who live in Panama called the Kuna.

Hollenberg had been studying the Kuna for over a decade, initially because it appeared that they never developed high blood pressure. He also found that they developed the "big four" diseases at a rate of less than 10 percent. If the Kuna moved to the mainland, however, their blood pressure and disease rates were more consistent with the general population of Panamanians.

In their native homes, the Kuna drink as many as 40 cups of cocoa per week. Hollenberg theorized that a type of flavanol called epicatechin, which is typically processed out of commercial cocoas because it makes them bitter, may be the reason. Epicatechin may improve circulation and relax constricted blood vessels by raising levels of nitric oxide in the blood.

The Kuna study is just one of numerous studies that have been conducted over the past decade about the disease-fighting properties of dark chocolate, especially its effects on conditions that lead to heart disease. The majority of them (including the Kuna study) have had a connection to Mars, Inc., but not all.

Drs. Mary and Marguerite Engler have been researching connections between cardiovascular health and nutrition for many years, and they published an independent study on the benefits of dark chocolate. It showed that people who ate a 1.6-ounce bar of high-flavanol chocolate a day for two weeks had greatly improved arterial function and flexibility.

An April 2001 review of recent studies indicates that high dark chocolate consumption can decrease your risk of diabetes, heart disease and stroke by as much as 30 percent. However, there's still a long way to go. The methods for actually measuring flavanols are imprecise. Mars claims to have perfected a process for preserving them in consistent amounts, known as CocoaPro, and it's not sharing. The company sold a special type of high-flavanol chocolate called CocoaVia but discontinued it in the United States in 2009 (it does still sell a cocoa powder by the same name). So for now, keep in mind that dark chocolate with a high percentage of cacao may be good for you, but moderation is still the name of the game.