by John Fuller
Prev NEXT
4 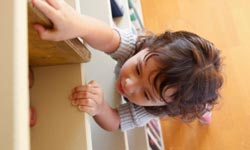 At 5 feet, 11 inches, Franklin was actually on the tall side for a Founding Father: Not a guy you would expect to invent a reaching device. But Franklin liked his books -- even going so far as to become a vegetarian at 16 so he could save more money for books -- and by late adulthood, Franklin's homes were jammed with floor-to-ceiling bookshelves.

To reach the top shelves without using a step ladder, Franklin fashioned a "long arm" in his workshop. It was simply a piece of wood with two "fingers" mounted on the end. By pulling on a cable, Franklin could bring the fingers together to grip a book off a high shelf.

Although they're rarely seen in libraries, versions of the long arm remain popular among anybody needing a bit of extra reaching power. Dwarfs (adults who are under four feet tall) will sometimes carry reaching arms to grasp door handles and countertops. Highway cleanup crews carry stainless steel arms to pick up litter on the side of the highway, people suffering from severe arthritis will use reaching devices to take the strain off their joints and the nation's lazy use the device to grab a beer without getting up.