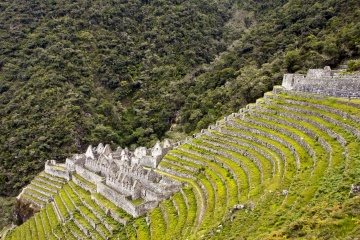 Incan farmers planted crops on the steep peaks of the Andes by using agricultural terraces like these seen at the ruins of Winay Wayna in Peru.
iStockphoto/Thinkstock

In the 13th century, a small group of people living high in the Andes Mountains migrated down into the valley of Cuzco in southeastern Peru. Just over 200 years later, that initial band of travelers had grown into a mighty empire covering most of the Andes with an estimated population of nine to 16 million people. That empire belonged to the Incas, and although it thrived only from 1438 until the Spanish conquered it in 1532, its accomplishments were remarkable. The Incas gave birth to ideas and inventions still in use today.

The might and reach of the Incan empire is all the more impressive because it developed without currency, the wheel or a written form of communication.

What it did have, however, was a highly developed organizational system and a near limitless workforce that helped create a culture in which wonders -- such as the hauntingly beautiful Machu Picchu complex -- abounded. Here are five of them.