From ARPANET to Internet 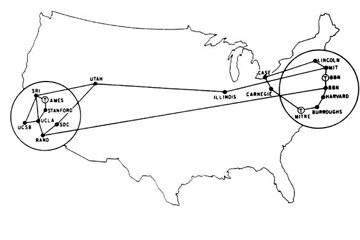 This map from 1972 shows the layout for ARPANET, a predecessor to the Internet.
Apic/Getty Images

The first big steps in building the Internet stemmed from a project called ARPANET. The United States Department of Defense (DoD) funded a project to build the technology that could support computer networks even if the computers connected to the network used different operating systems. Before ARPANET, all computer networks were limited in size and homogenous, meaning all the machines connected to the network were identical.

The program manager for the ARPANET project was Larry Roberts, who was heavily involved in the system's design. An engineer named Mike Wingfield designed the interface that would allow a computer to link with an Internet Message Processor (IMP), a device that allowed different computers to communicate across the same network.

Hardware wasn't the only obstacle. Computer scientists had to figure out a way to make different machines understand one another through a common set of rules called protocols. Two of the most important protocols were the Transmission Control Protocol (TCP) and Internet Protocol (IP). These sets of rules replaced an earlier set called the Network Control Protocol. They're what ultimately allowed the ARPANET to connect to other networks. The two men responsible for the development of these protocols were Robert Kahn and Vinton Cerf.

Three other people who contributed to the way the Internet works were Paul Baran, Donald Davies and Leonard Kleinrock. These mathematicians designed packet switching, which is how computers send information over the Internet. Rather than send data as a giant file, computers divide files up into packets. It's possible, though not likely, that each packet associated with a single file could take a different pathway through a network to reach its destination. Once there, the receiving computer reassembles the file based on information included with each packet.

Other notable contributors were Ray Tomlinson, who invented e-mail, and Abhay Bhushan, who developed the original specifications for file transfer protocol (FTP). In 1983, Paul Mockapetris invented something that's key to the way we interface with the Internet: the Domain Name System. Devices connected to the Internet all have addresses that are a series of numerals. But most people aren't very good at remembering long strings of numbers. Mockapetris developed a way to let people type in word-based addresses that computers could cross reference with a database of numerical addresses.

As for the Web, that comes to us courtesy of Tim Berners-Lee. The Web is relatively young -- Berners-Lee created it in 1990. But in that short time it's become one of the most popular ways to interact with the Internet -- so much so that some people mistakenly believe the Web is the same thing as the Internet.

These are just a few of the individuals whose work blossomed into the creation of the Internet. Without their contributions, we wouldn't have the global network of networks, one of the most remarkable inventions in human history.