Challenges of a Mars Landing 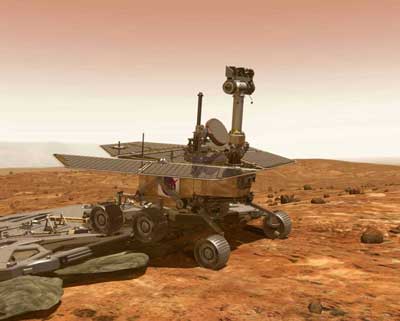 An artist's rendering of one of the two Mars Exploration Rovers, Spirit and Opportunity. Both were easier to land than human-accessible landing vehicles because they're so lightweight.
Image courtesy NASA/JPL

The challenges of a Mars landing are numerous, although researchers are planning and working hard to figure out exactly how we'll pull it off. Assuming people are able to arrive in the vicinity of Mars, there are a few elements to consider when it comes to landing. Scientists and engineers are already throwing around different processes and design ideas. Considerations are being given to the shape of the vehicle, the type of fuel it will use, the location of its engines and the size of its payload. Another question is whether propulsive maneuvers, performed in the form of short thruster burns, will be accompanied by parachutes during landing. There is also the issue of how best to accommodate astronauts during interplanetary missions ... the list goes on.

One of the main issues with landing humans on Mars is figuring out how to slow down so the vehicle landing doesn't smash into the ground. The problem is Mars' thin atmosphere. This issue doesn't affect the Mars rovers' landings because those machines are lightweight. If humans land on Mars, they'll need to bring quite a bit of luggage and, without a dense atmosphere to provide friction, it'll be very difficult to slow this heavier payload.

The way friction helps slow moving objects can be seen in your everyday life. For example, think of a time when you saw a driver slam on his brakes to come to a stop quickly. Also, airplanes -- much like spacecraft -- use the air's friction to decrease speeds and land safely.

The landing situation is further complicated by other factors affecting the density of Mars' atmosphere. The season, weather, latitude and even the time of day can change the atmosphere's density. For example, almost 8 million metric tons of carbon dioxide leaves and re-enters Mars' atmosphere seasonally. That's comparable to nine inches (23 centimeters) of dry ice (solid carbon dioxide) [source: Encyclopaedia Brittanica]. Researchers are working on modeling Mars' atmospheric changes so the astronauts can land within a sufficiently dense portion that still provides enough visibility. Planners are considering whether the arriving spacecraft should immediately proceed to the surface (possibly easier from an operational standpoint), or park in orbit before landing. Parking in orbit gives the astronauts more flexibility in case a dust storm strikes, similar to when airplanes circle the airport in bad weather.