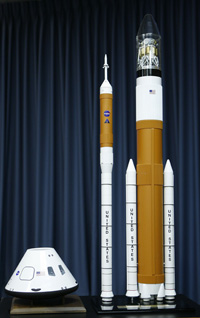 These models of the Orion crew exploration vehicle (left) and Ares I and Ares V (right) represent the spacecraft that'll soon travel to the moon. These spacecraft, or similar ones, could later be heading to Mars.
Matt Stroshane/Getty Images

Landing on Mars isn't going to be a walk in the park, but it also might not be as tricky as first thought. Although ideas are still being hammered out, here are some details of what a prospective mission plan to Mars could entail.

Planners must decide if the landing should be done in stages, by sending payloads down separately, or all at once. Landing a large mass could probably be achieved, but astronauts might be restricted to landing on portions of the planet with low elevations, and they might be able to carry only a small amount of supplies for a short visit of limited scope.

One idea put forth by aerospace expert Robert Zubrin in his book, "The Case for Mars" involves sending a cargo-carrying spacecraft prior to the habitat spacecraft that contains the human crew. This cargo vehicle could provide enough supplies to increase the length of the astronauts' stay and already be fueled and ready for the return trip (discussed below). The astronauts can leave the habitat spacecraft they originally arrived in behind, in order to begin the development of an infrastructure on Mars.

The key to Zubrin's plan is that the fuel for the return voyage is manufactured on Mars. The atmosphere of Mars (unlike the moon's) has an abundance of carbon dioxide that may come in handy to future astronauts. For example, by mixing about six metric tons of hydrogen (a surplus of hydrogen could be taken aboard for this reason) with carbon dioxide, a chemical processor could create enough methane and oxygen to propel the vehicle during liftoff and the trip back to Earth. From these same basic building blocks, the processor could also generate the oxygen, water and fuel our astronauts would require during an extended stay on Mars, as well as the flight home, saving outbound cargo space.

Planners are also studying whether to leave a portion of the spacecraft in orbit, or bring it all down to the surface. But knowing the spacecraft (what remains of the original that blasted off from Earth) is able to land on Mars is an important factor in the mission plan's design. That remaining portion is sometimes referred to as the Earth return vehicle (ERV), and it's what astronauts would use to eventually travel back to Earth. Being able to land the entire ERV -- as opposed to just a lander -- could allow for longer visits and avoid complications related to complex orbital maneuvers [source: Zubrin]. But these sorts of technical decisions are still being debated.

It looks like we're ready to descend to the surface, so let's take a closer look at what we're riding in. Currently, a spacecraft heading toward Mars is slated to resemble the old Apollo program -- along the lines of the new Constellation program, which is planned to take humans back to the moon.

The ERV (or whatever portion of the spacecraft will be landing) will likely end up looking a bit like a gumdrop. A large, dish-shaped aeroshell (or heat shield) will help increase the amount of friction created when the craft cuts into the atmosphere, thus slowing it down [source: Zubrin].

A likely scenario is that after the craft makes an initial pass through the atmosphere to reduce its speed, it returns to an orbital position. At the selected time, the aeroshell is again employed -- possibly with a parachute -- to make the final pass through the atmosphere toward Mars' surface. Small thrusters can then be fired to ensure a smooth landing. To learn more about landing maneuvers, read How Space Shuttles Work.

­Now that we've examined some of the unknown aspects surrounding a Mars landing, let's discuss the other questions about the mission.