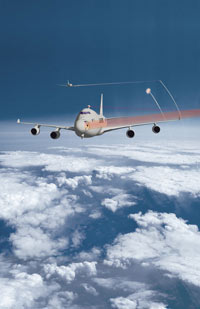 In the Gulf War, Saddam Hussein's forces fired SCUD missiles at Israel and U.S. bases in the Middle East. The Patriot missile defense system was deployed to protect American interests. Patriot missiles can destroy incoming missiles on their downward path, but what if you could catch it earlier and destroy the missile during its boost phase (the upward path near its origin)? That's what the U.S. Air Force's Airborne Laser (ABL) is designed to do -- it's being developed by Boeing, Northrup Grumman and Lockheed Martin contractors.

The ABL is mounted in a modified Boeing 747 jumbo jet. It consists of four lasers, advanced adaptive optics, sensors, and computers to locate, track and destroy missiles. It works like this:

All of the operations are coordinated by computer.

The Air Force is currently testing the ABL and says that its range is in the order of hundreds of kilometers. The ABL will require a crew of six when it is fully operational, and they'll wear special safety goggles to protect their eyes from possible reflections of the beams by water droplets in the air.

High-energy lasers like those developed for the ABL are being designed and developed for use on land and at sea. These lasers would be truck- or ship-mounted and capable of shooting down incoming missiles, artillery shells and possibly enemy aircraft.