Environmental Effects of a Cranberry Bog 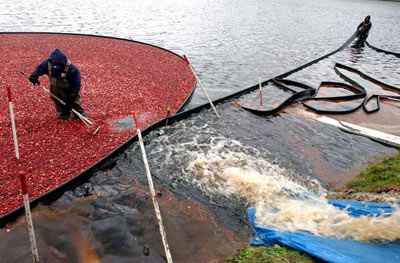 Commercially grown cranberries can negatively impact the environment, but if you look at the situation closely, you'll notice something of a trade-off taking place. As we've learned, fresh water is crucial to a bog's survival, but local streams and rivers can be harmed by the pesticides and fertilizers often used in a cranberry bog. This pollution of the waterways can hurt fish and other aquatic life. Another threat is the potential for increased water temperature in waters downstream from the bog site. The increase in water temperature can result from the erection of dams in streams to create water-supply ponds or diverting water in streams for their bogs. The warmer water has been shown to have a damaging effect on the trout's habitat. In addition, cranberry cultivation has accounted for a significant portion of wetland losses; the result of converting a natural wetland into a bog is a loss of wildlife and biodiversity [source: Watson].

There is a silver lining to all of this, however: Growing cranberries commercially requires a substantial support network which can comprise many acres of undeveloped fields, forests, streams and ponds. These support lands provide valuable habitats for wildlife. Cranberry farms can also serve as a barrier to urban sprawl: By initiating the best management practices possible, farmers are also taking more eco-friendly approaches to crop cultivation [source: Watson]. For example, they've reduced the amounts of pesticides they use by establishing Integrated Pest Management Programs (IPM). IPM is an initiative of the Environmental Protection Agency (EPA) that aims to protect public health, diminish pollution in ecologically sensitive areas and reduce farm workers' exposure to pesticides by reducing their use on crops. The initiative accomplishes this by carefully monitoring the way pests interact with their environment and using this information in tandem with pest control methods that benefit the environment [source: Cahill]. The cranberry industry has also been actively developing practices that encourage the protection of water quality and the wetlands [source: Watson].

As we've seen, North America supports a robust cranberry industry. Cultivating this crop from the cranberry bogs we've just learned about has had some effect on the environment. Whether this effect is negative or positive just depends on your point of view.

Take a look at the links below for lots more information on cranberry bogs and the cultivation of the cranberry plant.