by Garth Sundem
Prev NEXT
8 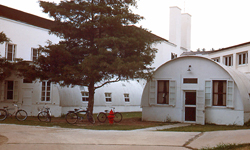 Children with leprosy studied at the Quonset huts at the leprosarium in Carville, La. Louisiana quarantined leprosy patients at the facility until 1957.
U.S. Department of Health and Human Services/Centers for Disease Control and Prevention

But this isn't the first concrete mention of the disease. That honor goes to the Egyptian "Ebers Papyrus," written in 1550 B.C.E., which recommends, "If you examine a large tumor of Khonsu in any part of a man and it is terrible and it has made many swellings. Something has appeared in it like that in which there is air ... Then you shall say concerning it: It is a swelling of Khonsu. You should not do anything against it" [source: Nunn].

While typhoid and cholera are fairly straightforward in their aggressive spread through water sources, leprosy relies on another dispersion strategy -- that of dormancy. People can carry the bacteria that cause leprosy for 20 years or more before showing symptoms, and during this time can spread the disease.

One historical challenge in treating leprosy was diagnosis. In its early stages of expression, leprosy looks much like syphilis and somewhat like psoriasis. Misdiagnosis landed many psoriasis sufferers in leper colonies where many eventually did, ironically, contract and die from leprosy due to increased exposure.